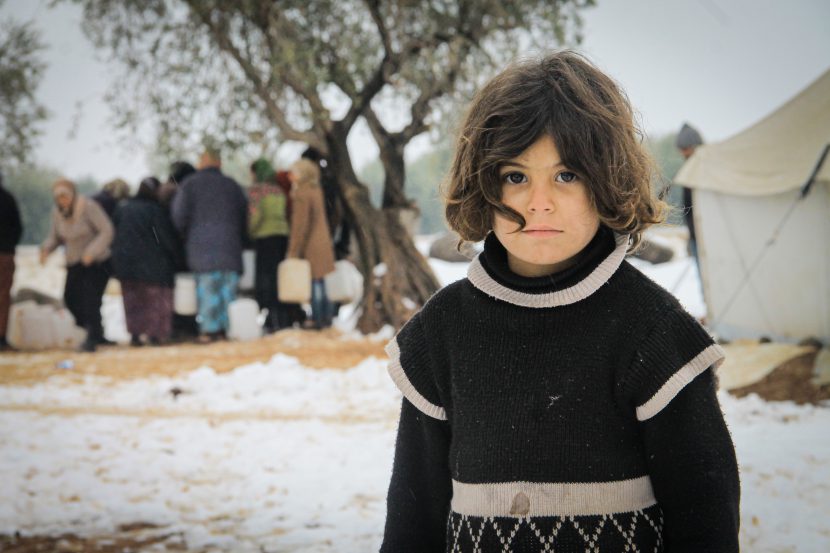 A lack of provisions regarding the issues of invisibility of children in asylum-procedures and the adult-focus of the migratory framework often results in the lack of protection of this, especially vulnerable group. At the Moroccan-Spanish border in Melilla and Ceuta this is particularly visible in the implemented push-back procedure of migrant children and other asylum seekers. This indiscriminate treatment of children by the Spanish border authorities results in the lack of protection of children as they are suffering inhuman and degrading treatment, and being sent back into dangerous and unfavourable situations.

The Spanish enclaves Melilla and Ceuta are located in the north of the African continent, and despite their location, are a part of the Kingdom of Spain. Both cities share the only direct land-based border of an EU country with Africa, more precisely with the country of Morocco in North Africa.

This Spanish-Moroccan border as a whole is protected by a barbed-wire fence structure on the Spanish territory. (European Centre for Constitutional and Human Rights, 2018). The construction and therefore the protection of the only African-EU land border from irregular migration started in 1990 and was improved in heights and technical surveillance over the years, costing Spain several hundred million euros (some of this amount being the funds from the EU) (Amnesty International, 2015).

Until the end of 2014, Spain lacked legal and accessible procedures to apply for asylum at the border and lacked a legal basis for the implemented push back procedure as it relied on protocols legitimising, but not legalising it.

Apart from a broad reference to the international human rights and international protection standards, the Special Regime of Ceuta and Melilla does not provide for any specific provisions implementing or requiring a differential treatment of children and acknowledging their unique vulnerability, even in the situation of irregular entry into the Spanish territory.

In 1992, the Readmission Agreements between Morocco and Spain created a bilateral agreement for the cooperation for the readmission of migrants entering irregularly from Morocco into Spain. These Agreements determined Morocco as the gatekeeper of the external European border.

The readmission procedure, enshrined in Article 1 to 5 of the Agreements, provides that Spain can formally request Morocco to readmit migrants to its territory when these individuals are entering the territory irregularly. Moreover, the Readmission Agreement fails to implement provisions that acknowledge the vulnerability of children and create an obligation for states to implement appropriate measures to safeguard and protect these vulnerabilities.

Migrant Children at the Border

Based on the lack of formal and established reception centres for asylum-seekers, many migrant children reside in informal camps and settlements in Morocco (Human Rights Watch, 2014). The majority of children in these camps are of Sub-Saharan origin as the United Nations High Commissioner for Refugees (UNHCR) describes the access to the established legal and safe application procedures for international protection for those as effectively impossible (UNHCR, 2018). The Moroccan authorities control the access to the legal asylum offices at the border. The UNHCR published that during the period between 2014 and 2017 only 35 individuals of Sub-Saharan origin (compared to 11.150 individuals of Middle-Eastern and Northern African origin) applied for asylum (UNHCR, 2018).

This inaccessibility of the regular border procedures leads children of Sub-Saharan African origin to circumvent the existing procedures and to approach the border irregularly hoping to trigger the jurisdictional responsibility of Spain and consequently the obligation to assess their need of protection (European Council on Refugees and Exiles, 2020). If compared with the regular routes, the irregular routes are highly dangerous and go along with a high risk to the life and the well-being of these individuals (La Sexta, 2020).

According to the United Nations Special Rapporteur on torture, Nils Melzer, and the Office of the High Commissioner on Human Rights (OHCHR), this treatment of children who are residing in informal settlements close to the cities of Nador and Oujda amounts itself to ill-treatment and a violation of the prohibition of torture, inhuman and degrading treatment (OHCHR, 2018). Additionally, the CRC Committee is concerned about the implementation of the procedural safeguards enshrined “the best interest of the child” principle, the access to health care, the deteriorating health conditions of children in Migrant Reception Centres and the arrest and detention of refugee and asylum-seeking children (Committee on the Rights of the Child, 2014).

“Hot returns” or so-called “Push backs” describe expulsions on a de facto basis and without any procedural guarantees and protection of any person who enters a country irregularly. Notably, “the expulsions without any individual assessment of protection needs have become a documented phenomenon at Europe’s borders, as well as on the territory of Member States further inland. As these practices are widespread, and in some countries systematic, these “push backs” can be considered as part of national policies rather than incidental actions. The highest risk attached to push backs is the risk of refoulement.” (Parliamentary Assembly of the Council of Europe, 2019).

“The Guardia Civil expelled me twice. There was no opportunity to give an interview or my story. They don’t ask your age or anything, they just expel you. The Guardia Civil handed me over to the Moroccan military who hit me with wood everywhere [on my body].”

The individuals are indiscriminately detained, often violently, and through doors and gates in the fence structure pushed back into the Moroccan territory or handed over to Moroccan security forces who frequently use excessive violence (Human Rights Watch, 2014). These expulsions are carried out without any registration and assessment of the migrant´s identity and vulnerabilities as the Spanish authorities do not consider these individuals on their territory and in their jurisdiction (Human Rights Watch, 2014).

The Spanish authorities apply an operational interpretation of borders, which provides the possibility to move the demarcation of the border with the position line of the border officers. As a result of that interpretation, Spain requires individuals to physically cross the line of border officers to legally claim to be present on Spanish territory (Human Rights Watch, 2014).

This conception would allow the Spanish authorities to move the borderline on a case-by-case basis (Jesuit Migrant Service, n.d.) and denies any jurisdictional responsibility for migrants, who, by crossing the territorial border, are physically present on the Spanish territory and are under the effective control of the Spanish authorities (Committee on the Rights of the Child, 2019). This conception of jurisdiction is contrary to the universally accepted and binding concept of jurisdiction, which the ECtHR in its jurisprudence has defined as the exercise of effective control over a person or territory – de facto or de jure (Al-Skeini and others v UK, 2011).

View by the Committee on the Rights of the Child

D.D. is a Malian citizen born on 10 March 1999. On 2 December 2014, he arrived in Spain as an unaccompanied child. After his irregular attempt to cross the border by climbing the fence structure and whiling there for several hours without receiving any assistance from the Spanish authorities, he was arrested and immediately returned to Morocco without any previous legal and language assistance, initial assessment of his status as an unaccompanied child, identity check, interview or any assessment of his specific personal circumstances and vulnerabilities (Committee on the Rights of the Child, 2019).

In its advisory opinion, the Committee highlights that a state party “has an obligation not to return a child to a country where there are substantial grounds for believing that there is a real risk of irreparable harm to the child” (Committee on the Rights of the Child, 2019). In the case of D.D., the Spanish authorities by not assessing the identity, personal circumstances and vulnerabilities as well as the risk of persecution and irreparable harm, did not comply with such an obligation (Committee on the Rights of the Child, 2019).

Furthermore, considering the aforementioned circumstances a migrant child faces in the border area, ill-treatment and violence, and the manner in which D.D. was deported, being detained without being heard, Spain has violated Article 3 and 37 of the Convention. The lack of identity check and assessment of his situation violates Article 3 and 20 of the Convention (Committee on the Rights of the Child, 2019). Despite this adopted view by the CRC Committee and the obligation pursuant to Article 11 of the 2014 Optional Protocol on a Communications Procedure, Spain has not yet changed the implemented procedure and continues to violate the right of the child systematically in the border procedure (Committee on the Rights of the Child, 2019).

The latest well-documented report of a push back at the Spanish-Moroccan border was confirmed in January 2020, when 42 individuals, including two children, in poor health conditions were indiscriminately pushed back from the Spanish Chafarinas Islands to the Moroccan port of Ras El Ma by the Guardia Civil (Cadenaser, 2020). The Spanish government disavowed this push back despite conclusive and decisive evidence of the contrary in the form of photos and GPS locations. The government published this push back as a rescue mission by the Moroccan authorities without any involvement of the Guardia Civil.

Despite a quasi-universal recognition of children´s rights and the child as an individual rights bearer in the UN Convention on the Right of the Child, the implementation and recognition thereof in the intersection of Children´s Rights Law and Refugee and Migrant Law has still a long way ahead. States have to extend the existing International Refugee and Migrant Framework to ensure an effective and age-appropriate protection of migrant children.

Committee on the Rights of the Child (October 2014), “Concluding observations on the combined third and fourth periodic reports of Morocco”, CRC/C/MAR/CO/3-4.

Jesuit Migrant Service Spain (n.d.); University Institute of Studies on Migration; “No protection at the border: Human Rights at the southern frontier: between Nador and Melilla”.

The Agreement between the Kingdom of Spain and the Kingdom of Morocco on the movement of people, the transit and the readmission of foreigners who have entered illegally entered into force on 21 October 2012. It had been provisionally applied since 13 February 1992, date of its signature.

UNHCR (3 April 2018), “Supplementary observations by the Office of the United Nations High Commissioner for Refugees in the cases of N.D. and N.T. v. Spain before the Grand Chamber of the European Court of Human Rights”. UNHCR (February 2019), “Fact Sheet – Morocco”, p. 3.