An archipelago composed of 15 islands in the Pacific, the Cook Islands is an independent state in free association with New Zealand since 1965. Since numerous economic reforms in 1995-1996, a significant part of the population has emigrated to New Zealand each year. The Cook Islands has decided to slow this depopulation, the main concern of the government today, by focusing its politics on education and training. 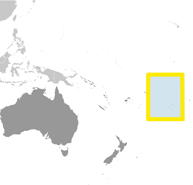 Due to these close ties with New Zealand, the Cook Islands has adopted a system of free and compulsory education for all children aged 5 to 15 years old. In 2010, 98% of children received primary education. It is interesting to note that because the education system is a priority for the government, 47% of students are girls. Also, a voluntary educational system is in place for children aged 3 to 5. However, from secondary education onward, namely, 11 years old, the education rate does not exceed 64% of eligible children. Authorities have expressed concern that there continues to be a high drop out rate for adolescents from secondary or higher education.

In the past handicapped persons were subject to discrimination, especially in education. A welcome change has taken place in the Cook Islands, because handicapped persons have attained equal legal rights. A plan of politics and action aiming to promote integrated education has been developed since 2008.

Even though the infant mortality rate is relatively low (9 in 1000), improvements remain to be made in order to respect a child’s right to health. The lack of sexual education and the weakness of the health system for children have resulted in a relatively high prevalence of sexually transmitted diseases.

The Cook Islands has a large number of adolescent mothers, a direct consequence of sexual abuse, rape, or even incest. The elevated rate of early pregnancies is also due to the difficulty for adolescents younger than 16 in being able to access contraceptive methods as well as the lack of adequate sexual education.

Furthermore, the Cook Islands Act 1915 bans abortions in cases of incest or rape.

Domestic violence is very prominent in the Cook Islands, stemming mainly from the dominant culture of shame and silence and also the pressure to prevent children from filing complaints. Although officially an average of 8 sexual abuse cases involving children are reported annually, local NGOs are worried that the number is growing. The children most affected are generally between the ages of 10 and 14 years. Even when the police are alerted to this type of violence, generally no legal action is taken because of legislation in force.

NGOs have been alarmed by the sexual exploitation of young girls and the role played by the tourism industry in the rise of prostitution.

According to a study conducted by a local NGO in 2007, child prostitution takes place in a secret, unorganized manner, explaining the lack of exact data. Also, this study revealed that young boys are often sexually exploited by men in exchange for money, alcohol, or even cigarettes. As homosexuality is forbidden and illegal in the Cook Islands, the police are not informed of cases of exploitation of young boys because the boys fear legal reprisal.

The Industrial Relations Officer can and must decide if a child younger than 16 can work. Decision making authority is put into the hands of this Officer. Moreover, it is specified that minors are forbidden to work “in any dangerous activity” with no further elaboration.

The 1973 Marriage Act stipulates that the minimum legal marrying age is 16. It should be noted that children are still able to marry at a younger age as long as they have the consent of a parent or guardian. The Convention on the Rights of the Child only authorizes marriages for those 18 or older. Legislation in the Cook Islands offers little protection in this area.

Access to justice is limited. Indeed, the Crime Act is perceived by the population as inadequate because many acts such as domestic violence, moral abuse, intimidation, rape or domestic property offenses are not considered.

Note that the Cook Islands have abolished the death penalty in November 2007 and replaced by life imprisonment.