Since the end of Mouammar Kadhafi’s dictatorship, Libya has been very unstable. Since he ruled for more than 41 years, Colonel Kadhafi was responsible for major advances in the country, mainly in the fields of education and health. However, his repeated violations of fundamental human rights and freedoms led the people to start a revolution. 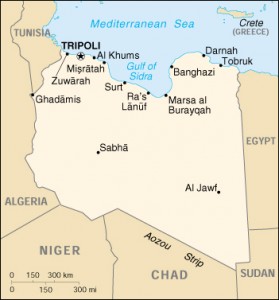 Libya is one of the richest countries in Africa. Thanks to its natural resources, including oil, the country’s economy is stable. However, not all Libyans have access to these riches and many inequalities remain. Today, about a third of Libyans live below the poverty line.

Before Libya became independent in 1951, the Libyan population was largely illiterate. Due to this, primary education became mandatory and free. By the 1990s, more than 80% of children between the ages of 12 and 17 had received an education.

In addition, students could study abroad with the expenses paid by the government. They received a stipend of 1600 euros per month.

After the revolution against the Libyan regime, more than 61,165 students and some 36,000 college students did not finish their school year. The bombings destroyed more than 15 schools and many others were closed.

Libyans have access to free health care. Their hospitals are among the best-equipped facilities in the world. However, during the 1990s, the United Nations sanctioned the Libyan government, accusing them of carrying out terrorist attacks against the French airline, UTA and the American airline, Pan Am.

These sanctions carried with them harmful consequences on access to food, medicine and vaccines.

In 2011, the Libyan revolution had serious repercussions on children’s health. The country lacked medicine for pregnant women and their babies. Many children were subjected to psychological trauma after witnessing terrible events such as the loss of a family member. Many children were also separated from their parents after becoming refugees at the country’s borders.

Many young women are detained in social re-education centers if they are suspected of having broken the moral codes of Libyan society. For example, this could include having sex before marriage, which is strictly forbidden by law. These girls are held for an indefinite time without trial.

Even worse, young girls can end up in these establishments simply for being raped. Due to this, rape victims are discouraged from reporting the crimes because they themselves could end up being prosecuted and held in a social re-education center.

Libya is home to many minorities including Berbers (Amazighs) and Toubous. During the 1970s, thousands of Touaregs (a nomadic Saharan population) migrated to Libya due to a catastrophic drought that was affecting the region.

These indigenous peoples are often victims of discrimination by Libyan authorities. The Amazighe and Berber languages are not recognized and it is prohibited to speak them in public. The entire education system is based on Arabic and minority children are obligated to learn the language. In practice, however, Berber is still used as the primary language in many villages.

Toubous also face wide discrimination. In December 2007, the Libyan government stripped the Toubous of Libyan nationality, claiming that they were actually Chadian. Additionally, the government created several laws prohibiting the Toubous from accessing the education and health care systems.

Today, with the end of Khadafi’s dictatorship, these indigenous peoples are hoping that their cultures and languages will be recognized. They would like to assume the same rights as Libyans.

The 2011 Libyan revolution had serious repercussions on the well-being of Libyan children. Many were hurt or killed over the course of the uprising and others were victims of bombings by foreign powers.

Many weapons that appeared in villages were collected by children as trophies or to be sold.

Handling weapons can be very dangerous. Due to this, many countries reported several accidental explosions and incidents of children detonating grenades.

Libya is a transit country for human trafficking towards Europe. Many women and girls from Sub-Saharan Africa pass through Libya in order to be sent to European countries. In most cases, they are victims of sexual abuse for financial gain or employed as maids by Westerners.

The Libyan government has not yet taken any real measures to control this trafficking.