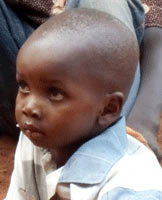 Burkina Faso is one of the least developed countries in the world. Also, the situation of children’s rights there are extremely serious. Despite the presence of a large number of NGOs and despite recent efforts by the government concerning the matter, the principles of the Convention of the Rights of the Child are very far from being guaranteed.

Close to half the Burkinabe population live below the poverty line. Burkina Faso is one of the least developed countries in the world, and the high unemployment rate worsens the situation of its inhabitants. This situation is deplorable for the life of children: malnutrition, child labour, sickness and danger, they must fight every day for their survival.

In Burkina Faso, the infant mortality rate is dangerously high and hope for life particularly low.

Childbirth is relatively risky for Burkinabe women. They often give birth at home without medical assistance in places without sanitation that are unhygienic for such an activity. What’s more, more than 15% of new-borns are underweight.

The serious lack of hygiene, medical supplies, and qualified personnel is favourable to the spread of epidemics and viruses in Burkina Faso. Despite an important vaccination campaign recently ran by the government, meningitis continues to spread and regularly kills children. Other sicknesses are widespread and sometimes seriously affect the health of young Burkinabe; these would include diarrhoea and polio infections. HIV is also extremely virulent and many children find themselves orphaned by AIDS.

Additionally, the Burkinabe government must also centre its efforts on the acceptance of vaccines and medication by local families. In fact, customary practices, religious beliefs, or even the lack of belief in sicknesses mean that some families refuse to vaccinate their children, or even don’t believe it necessary.

The geographical situation of Burkina Faso is not favourable to thorough and abundant purification of drinking water. Numerous children and more particularly those living in rural areas don’t have sufficient access to drinking water. The consequences are serious; their health is adversely affected and they can’t benefit from minimal hygiene.

A number of NGOs in the area build structures to access drinking water. However, they cannot always provide this service throughout the country. Some villagers experience huge difficulties accessing water. 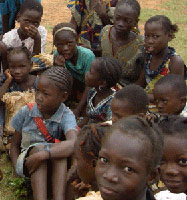 According to a study performed from 2005 to 2009, more than 45% of Burkinabe children are not educated. However, it should be noted that Burkina Faso has made a number of efforts to improve the situation in the last decade. The progress is considerable, notably concerning the gender equality in schools.

Unfortunately, educational materials available to children are terrible and educational structures are deplorable.

In Burkina Faso, close to one in two children are forced to work to support family needs.

Because of this, many young boys work on cotton plantations in deplorable conditions and for a pittance. As for young girls, they leave their family to go work as domestic servants. Employed by richer families, they are sometimes beaten, raped, or cruelly exploited. Some of them return to their village pregnant by their rapist.

In northern regions where the climate is terribly dry, some Burkinabe families devote themselves exclusively to finding gold. Children must help search from a very young age. Yet, working in the mines is frighteningly dangerous and high risk. What’s more, it is completely unsuitable for children who suffer from a lack of sun, water, and food. There are estimated to be around 10,000 children exploited in the mines in Burkina Faso.

Forty-eight (48%) of young Burkinabe women surveyed admit to have been married before the age of 18.

They are prepared from a very young age in their future role as a spouse. However, these marriages often have serious consequences on the physical and mental health of the young girls who don’t yet understand the consequences involved in marriage. What’s more, these young Burkinabe girls don’t always choose their husbands. In certain ethnicities, the casts must be respected and “mixing” is forbidden.

Around a quarter of young Burkinabe girls are subjected to genital mutilation. The practice of female circumcision is found in almost all ethnic and religious communities in Burkina Faso. These practices can have serious physical and mental consequences for young girls. In fact, the operations performed are not professional and use materials that are not disinfected. As a result, infection, illness, fever, and mental trauma sometimes follow from these mutilations. 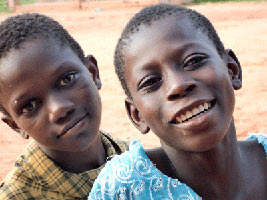 The registration of a child’s birth and the attribution of a nationality give them legal capacity; this means that children whose identity is not registered will not be officially recognized as a member of society and will not be able to assert their rights; they will then be invisible in the eyes of society.