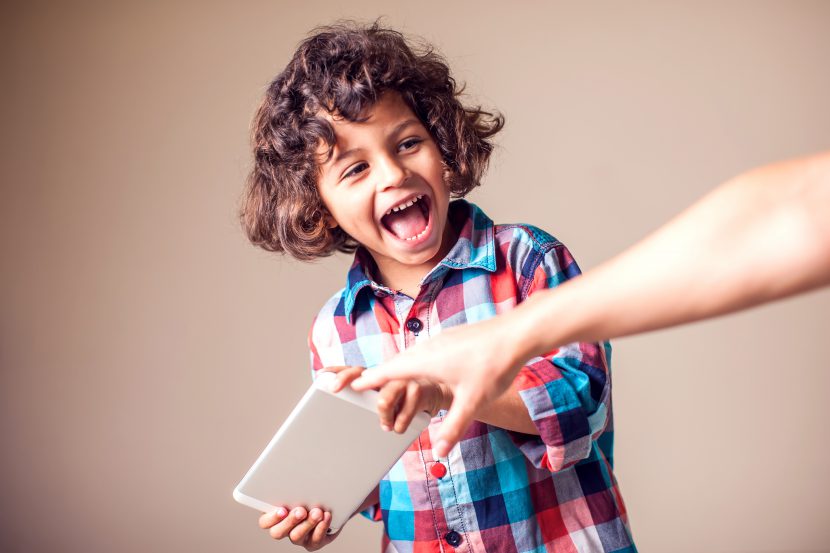 As the world continues to evolve, children are no longer exempt from the increasingly wide reaches of technological innovation. Gone are the days when children would solely dream of green grass and imaginative outdoor games. Today, many children are closely familiar with the online world from an infantile age. This exposure to the Internet can have both positive and negative impacts on child development, necessitating greater study to better understand the effects of Internet exposure on child wellbeing.

What is Screen Time?

With Internet content seeping into child-accessible, portable devices such as phones and tablets, it is harder than ever to sufficiently supervise child Internet activity and monitor its impact (McDool, 2020). Though definitions of screen time are typically broad and varied (Wheelwright, 2020), Merriam-Webster defines screen time as the “time spent watching television, playing a video game, or using an electronic device with a screen (such as a smartphone or tablet) (Merriam-Webster).

The current generation of children are growing up in a complex digital ecosystem with varying mental health impacts that require further study (Granic, 2020). Children’s interaction with screens is a vitally important topic because of the time children spend on these devices and the ambiguity of their effects (McDool, 2020). Moreover, past research has focussed excessively on adolescents as opposed to young children, as well as the negative effects of technology rather than the opportunities that it presents (Burns, 2019). Research in this area is often behind the curve, quickly overshadowed by new developments in the technological space which present new challenges and opportunities for children (Burns, 2019).

Despite this, it is clear the younger segment of millennials are the first to have grown up using, and interacting with, digital media (Granic, 2020). Recent studies in the United Kingdom, for example, suggest that two-year-olds spend over two hours a day interacting with screens, with this number jumping beyond three for three-year-olds (Roberts, 2019). In this new technology-filled generation, there is no longer a detachment between child’s physical experiences and their digital ones, as devices are present in nearly all day-to-day interactions.

Given the sensitivity and importance of a child’s early years, it is crucial that parents and carers are able to identify the risks digital exposure carries and act accordingly. Digital devices are designed to serve multiple functions, including socialisation, working, communication, entertainment and organisation, among others (Granic, 2020). Given the wide range of purposes that technology now plays in our lives, merely restricting digital interactions is an insufficient response. Modern child-protection efforts have to develop a deeper understanding of the impact of digital technologies and media on children’s development and couple this with innovative methods to better support children’s growth in the modern world.

It is in this spirit that organisations are beginning to design and implement policy guidelines to guard children against the harms of the digital age. The Commission on Ending Childhood Obesity has called for “clear guidance on physical activity, sedentary behaviour and sleep in young children”, in response to modern child lifestyles. Institutions such as the American Academy of Pediatrics (AAP) have published recommendations that children between the ages of two and five spend less than one hour per day engaged with a screen to promote a healthy sleep and exercise schedule among other reasons (Reichel, 2019). The World Health Organisation’s (WHO) 2019 Guidelines re-emphasise the importance of physical activity, quality sleep and reduced sedentary time for children (WHO, 2019). Specifically, the Guidelines conclude with recommendations which state (WHO, 2019):

These recommendations all mention the importance of routine physical activity during a child’s growth and engaged activity (such as reading and storytelling) when they are sedentary and not physically active (WHO, 2019). These views are reaffirmed in Family Media Use Plans and America’s Media and Children Communication Toolkit.

Though it is easy to focus on the detrimental impacts of the digital space on children, there are potential benefits that are worth highlighting. Showcasing the positives of the digital space also acknowledges that it is an inevitable presence in children’s lives that must be accepted rather than rejected. A primary potential benefit of the digital space is its ability to provide a new form of education for children. Digital tools enable research, educational games, language toolkits and educational documentaries and materials (Lee, 2019). Technology also enables physical education by way of motion-controlled games as well as instructive videos for activities such as dancing (Lee, 2019). These avenues potentially provide parents and carers with an opportunity to turn their child’s tech-time into engaged time that pushes them to learn and engage with the material presented to them.

In addition to the physical and mental educational benefits, technology also gives children a chance to build their communication skills either directly or indirectly (Wheelwright, 2020). Exposure to media where other children are communicating positively or direct communication opportunities themselves allow children to build their social skills and develop an early understanding of the importance of efficient communication. In this way, technological platforms can build on and enable real-world interactions, such as grandparents talking to their children via video calls.

Notwithstanding the positive potential that the digital space presents for children, it is not without risk. A large number of these dangers can be attributed to excessive idle screen time rather than the screens themselves. In the short-term, unproductive and lengthened exposure to digital devices can lead to inconsistent habits in children’s sleeping, eating and exercise patterns (Morin, 2020). Screen time can also stunt a child’s development of imagination, socialisation and communication skills (Morin, 2020). These deficiencies have long-term effects and frequently lead to older children struggling with behavioural and educational challenges, as well as increased propensity for violence (Morin, 2020). Excessive sedentary time interacting with technology has also been shown to catalyse imperfect language development skills, lessened creative thinking and poor social skills inhibiting children’s interaction with peers and adults (Leatherwood-Cannon, 2018).

Modern research data has hypothesised that children who spend more than two hours a day on idle screen-time activities may score lower in language and thinking tests, whilst those exposed to more than seven hours a day suffered from a thinning of their cortex – the area of the brain that dictates critical thinking and reasoning (Cross). Broadly, it appears that screens narrow children’s focus of interest and limit their willingness to experience other forms of exploration and learning (Cross), though this research is not conclusive. For young children, particularly under the age of three, learning primarily comes through exploration and imitation (Cross). These skills are lost if idle screen-time replaces traditional forms of ‘playing’, leading to a “tunnel vision” approach to learning (Cross). The large majority of children are exposed to media which excessively spoon feeds them information, severely restricting their ability to form ideas and ‘learn by doing’.

“We’re not sure what this data means yet, but what we can hypothesize is that screens could inhibit certain aspects of a child’s development by narrowing their focus of interest and limiting their other means of exploration and learning.”

At face value, the digital space can have positive or negative impacts depending on how long children are exposed to screens. However, this view is excessively simplistic and a representation of a lack of research into the nuanced effects of screen-time on child development. The deeper problem lies in the lack of engagement in most forms of digital media. Interactive media – such as video calls with family members reading stories, or applications requiring child thought and input – can have the same positive benefits as physical interactions (Hogenboom, 2020).

Screens generally present information to our eyes and ears without engaging other senses, inhibiting children’s ability to practice mental imagery and creative imagination (Hogenboom, 2020). Research has shown, however, that enabling children to ‘play’ within well-designed, interactive physical spaces alongside interactive digital spaces can be beneficial (Hogenboom, 2020).  With COVID-19 pushing parents and children alike into increasingly indoor settings, parents must guard against their children’s passive consumption of digital media (Hogenboom, 2020).

Greater research is needed to assess the impact of different forms of screen-time on children as well as the surrounding environment (Pappas, 2020). While the most current research suggests that younger children do not learn well from screens, it has been shown to be important that children develop the ability to self-regulate their own interactions with the digital space as early as possible (Pappas, 2020).

Child outcomes are determined by a multiplicity of factors and experiences, the majority of which still remain inadequately researched and thus, unknown (Burns, 2019). The best way to protect children is to strike a balance between screen time and physical human interaction (Leatherwood, 2018). The message should not be that screens are either good or bad, but that technology is a tool which we must harness to push children towards social engagement, rather than take them away from it (Hogenboom, 2020).

In this way, the most important skill is to maximise children’s “potential benefits for cognition, physical and social outcomes” (Burns, 2019). There is little concrete research suggesting that screen time, in and of itself, negatively impacts children’s psychological wellbeing, however, ‘the broader family context – how parents set rules about digital screen time, and if they’re actively engaged in exploring the digital world together’ – are far more significant than screen time alone (University of Oxford, 2017).

To support parents in their desire to create positive digital spaces for their children, recent academic scholarship provides a few recommendations (Leatherwood, 2018):

Guide to screen addictions and responsible digital use.

Is social media an obstacle to my child’s mental health?

WHO. (2019). Guidelines on physical activity, sedentary behaviour and sleep for children under 5 years of age.

Cross. Dr. J. What does too much screen time do to children’s brains?

Granic, I. Morita, H. Scholten, H. (2020, November 5). ‘Beyond Screen Time: Identity Development in the Digital Age.’ An International Journal for the Advancement of Psychological Theory. Vol. 31 (3).