Guinea, also known as “Guinea-Conakry” in order to distinguish it from Guinea-Bissau, is committed to defending and promoting children’s rights. However, despite its promises, the country faces numerous problems that impede Guinean children’s ability to fully enjoy their rights.

More than 50% of the Guinean population lives below the poverty line. A great many children are affected by poverty which is apparent in every aspect of their life be it in terms of access to nutritious meals, sufficient financial resources, healthcare, education, etc.

The mortality rate of children below the age of 5 remains very disturbing. In effect, owing to an inadequate sanitation system, a lack of clean water and an absence of health services in rural regions, 142 out of every thousand children die each year.


In Guinea, malnutrition remains a serious problem. Around 30% of children suffer from chronic malnutrition.

Owing to widespread poverty, families do not have the means to obtain suitable nourishment. Lack of sufficient food often leads to dietary deficiencies as well as growth problems.

Primary education in Guinea lasts for six years. Kindergarten, moreover, only exists in urban areas and is generally private. As a result, not all children receive an education. In effect, it is estimated that only 50% of Guinean children receive schooling.

Guinea has made important progress with regard to education, but problems persist. For example, the quality of instruction remains below average, and the treatment of children leaves much to be desired.

The practice of female genital mutilation still exists in certain regions of Guinea. Owing to the nature of these excisions and the lack of hygienic precautions surrounding them, the health of the young girls who are subjected to this procedure is put at risk. Infections and hemorrhaging number among the problems that frequently ensue.

Child marriage still occurs in Guinea. Half of all girls are married before the age of 18.  Many of these marriages are arranged without the consent of the girls involved.

Child marriage has a negative effect on the health and development of young girls, as well as on their ability to exercise their rights. Married adolescents are limited with regard to social interaction, since they tend to abandon their schooling. Furthermore, they run the risk of premature pregnancy—which can pose serious health risk to both themselves and the resulting infant. 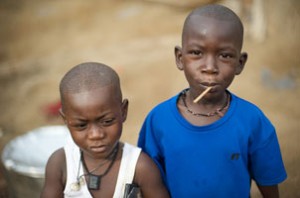 It is estimated that 73% of Guinean children have jobs, although they have not reached the minimum age for employment. 61 % work as domestic staff. Owing to economic difficulties, families are forced to make their children work.

Deprived of an education, such children end up working long hours, with low pay, and with little or no food. Furthermore, they run the risk of being discriminated against, of being abused, of becoming prostitutes, etc.


In the capital of Conakry, children wander the streets and take shelter in the alleys between buildings, where the ground itself serves as their bed. They live on the street and their rights to shelter, healthcare, education and nutritious meals, are constantly ignored.

Life on the street has a negative impact on all aspects of street children’s development—be it physical, psycho-social, cultural or economic.

Child trafficking in Guinea is a known problem. In effect, children are employed as domestic help; they are forced to work in the fields, to sell products on the streets and in marketplaces, etc. They are equally the victims of sex traffickers.

Guinean children are also the victims of trans-border trafficking. They are often sent to Mali, Sierra Leone or the Ivory Coast where they are put to work or otherwise subject to exploitation.