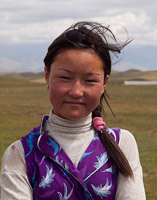 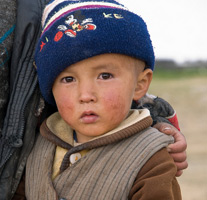 A former Soviet republic, Kyrgyzstan gained its independence in 1991. The Kyrgyz are a mostly nomadic people, consisting of several minorities including Russian, Uzbeks, Ukrainian. In 2010, conflict broke out between the minorities in the south of the country, displacing many in the neighboring country of the Uzbek minority.

Kyrgyzstan faces a major problem regarding the situation of children; each year, many young girls are abductedin the country and are forced to marry their captors.

Kyrgyzstan is the second poorest country in Central Asia. Over 36% of Kyrgyz children grow up in poverty and 7% live in extreme conditions of poverty. 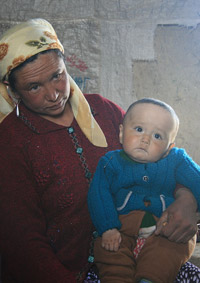 Kyrgyzstan is prone to earthquakes and floods. In 2010, there were an estimated 476 cases of polio in the country, which affected about 70% of children as a result of these natural disasters.

In Kyrgyzstan, school is mandatory and free until age 14. Secondary education is free until the age of 17. If parents do not respect this requirement, they are subject to financial penalties. However, rural areas generally escape these penalties because there is a lack of access to education in these areas.

The government is making an effort to defray the costs of purchasing school supplies for children whose parents have low incomes and for handicapped children. 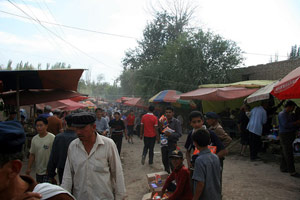 The country’s authorities are trying to take care of these children. Children are either being sent to their home if the address is known, a rehabilitation center oran orphanage. In 2008, there were 5,390 children in State managed institutions.Unfortunately, there are still thousands of street children who are on the lookout for a job to support themselves. They can thus become bottlers, thieves, indicators, racketeers, freight carriers, prostitutes, and street vendors. These children earn on average between 0.75 and 2 euros per day.

Though the law declares it unlawful for children under 16 to marry, forced marriages are becoming a common practice in Kyrgyzstan. Each year around 16,000 girls are abducted, raped and forced to marry their abductors.

Poverty appears to be the main cause of this social phenomenon. Parents often can’t payschool fees for their daughters and hope that marriage will offer a solution to their financial problems.This practice has negative consequences for the young girls. In the past six years, 15 girls committed suicide after being forced into marriage. 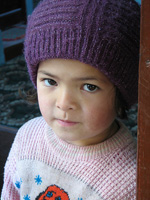 Prostitution is a practice that has become increasingly common in Kyrgyzstan. Many children, often young girlsare working in the sex trade industry. In Bishkek, the capital, more than 20% of prostitutes are young girls. The majority of these prostitution rings are controlled by female pimps.More and more boys, aged 12 to 16, are being exploited.

The clients, mainly business men, know the places where they can get sexual services from schoolgirls for less than a dollar. Many escorting services have sprung up in major cities.

Moreover, there has been an emergence of a new practice in the country. Young girls, mostly between 11 and 12, travel the main train lines to prostitute themselves. Once they have arrived at the terminus, these girls are abandoned by their client and remain a day or two in the street while waiting for a new traveler. 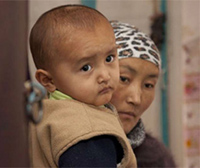 According to the UN High Commission for Refugees, there are over 17,000 stateless people and those at risk for homelessness in Kyrgyzstan. The majority of these at-risk groups are females or minors.Children who are not registered as citizens do not have the same rights as those who are. For example, stateless children do not receive any social benefits and do not have access to care because they constitute too large of a financial burden upon the state.