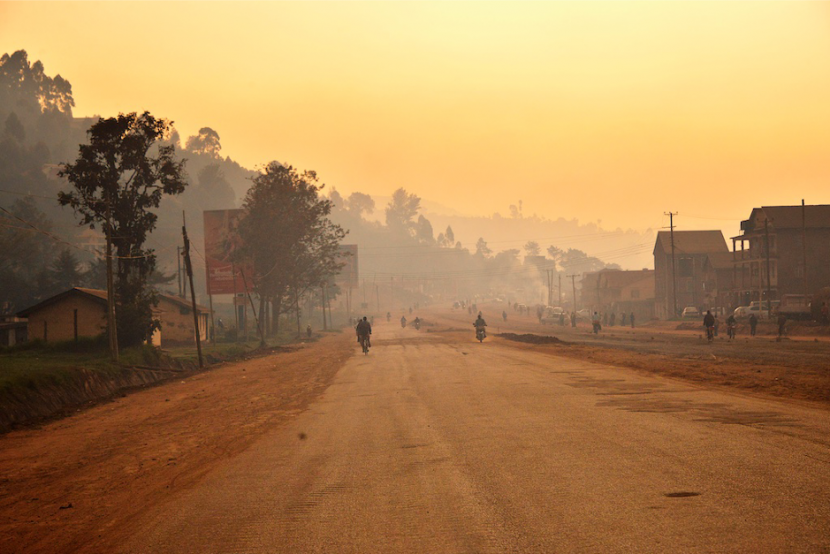 The following account can be considered an opinion piece. It is based on my personal experiences while volunteering at a humanist school in Kasese, Western Uganda in September 2019. While I aspire to adhere to factual representation, my personal bias certainly, and perhaps unavoidably, distort some aspects of my perception of reality.

Boda bodas are the motorcycle taxis most Ugandans use to get around. In a country of 43 million residents where 21 percent of the population live below the poverty line[1] having efficient yet affordable means of public transport helps keep the economy going. It is no surprise that Ugandan cities are “infested” with boda bodas and these lightweight and maneuverable taxis are commonplace even in the remotest corners of the country.

Boda boda riders are hardworking people. They spend hours on end waiting under the equatorial sun at street corners and roundabouts for their next passengers. They may take three passengers at once if they are lucky – this means a larger sum of cash. They might go unlucky and spend hours waiting in vain – their competition is fierce nowadays. Riders tend to be between the ages of 25 and 45 as buying their standard $1000 motorcycle is out of reach for most younger Ugandans.

It was late September, 2019. I had already spent a couple weeks volunteering at Kasese Humanist School and I was used to commuting to work by boda boda. I had a regular rider recommended by the school. He would wait for me outside my accommodation in the mornings and take me to school. He would pick me up in the afternoon and take me back home.

But one afternoon he didn’t show up at the time we had agreed he would. I decided to go and hail a boda boda to get me to town. As I turned the corner I saw a skinny teenager sitting on his motorcycle waiting for a prospective passenger to show up. Before I would have had a chance to approach him, he started his engine, turned his bike around, shot out and slammed the brakes right before me. During the ride to town he initiated conversation, and eventually I ended up looking for him on other occasions I was on my way to town – so that he could make more money.

Isaac, my new boda boda rider, was a red-eyed 16 year old, visibly exhausted, undernourished and desperate. He did not own his motorcycle, he was working for a man who loaned out bikes to young kids and collected their profits. Isaac only received a portion of the money he made. And riding a boda boda is not such a lucrative business at a time when fuel prices and inflation are on the up in Uganda. I can only imagine how little money Isaac must have lived on. Only by paying him double the fare could I make sure he would be able to keep at least half of his earnings.

Isaac was an orphan. (During my stay in Kasese I met many children orphaned by HIV, several of them carried the virus themselves. I wonder if HIV was behind Isaac’s tragedy, too.) His younger sister had been lucky enough to have food and shelter at the orphanage run by the school I was volunteering at. Isaac had dropped out of school. As he put it, he had been irresponsible when he was “younger”. Now he would have been happy to go back to school, but it was too late – he concluded with conviction. Instead, he was working for an employer who, I suspect, would only pay him enough to keep him alive.

I was soon to leave for Europe. I had managed to convince Isaac that it was not too late to go back to school. It never is. I am 37 and have never left “school”. I keep studying year after year. He is only 16. I arranged an interview for him with the school secretary who assured me they would find a solution for him if he really wants to study. Now it was up to Isaac to make a move. I sincerely hope he is riding school benches these days.

Children’s rights are human rights. The apparent division between the two is misleading. In our societies we tend to treat children as “lesser humans”, unequal to adults. Treating children as anything less than adults is a breach of their human rights. At 16 Isaac has the right to work and be employed. He has the right to fair work, employment that is just and respects his other human rights, such as his right to adequate standards of physical and mental health and wellbeing, or his right to education.

I seriously doubt that the conditions of his employment were in line with these rights, or with Isaac’s other human rights for that matter. His employment was rather reminiscent of modern day slavery and the lack of an efficient welfare program in Uganda acts as an enabler in this equation. The Ugandan state, just like an state, has a responsibility to protect its children. Child protection is every adult’s responsibility, including Isaac’s employer and prospective teachers.

Furthermore, those close to him are also accountable for supporting him on his journey to adulthood by encouraging him (and any other child) to bring out his talents, creativity and unique abilities to his own benefit, and the benefit of wider society.

There are many “Isaacs” out there. They can be found in the Global South and the Global North alike. You are likely to know “an Isaac”, or perhaps you are an Isaac yourself. Remember, peoples’ lives are primarily defined by the decisions they make, and these decisions are often informed by the influences they are subjected to. If you know an Isaac, make sure to be a good influence for them. If you are an Isaac yourself, never give up, it is never too late. Look for the right company of people and aspire to make the best decisions you possibly can.

At Humanium we aspire to be there for you whose human (children’s) rights have been violated or have witnessed a violation of children’s rights. We encourage you to contact us through our helpline.