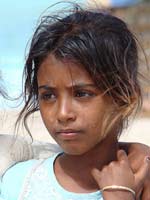 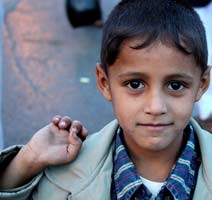 The living conditions for children in Yemen are dreadful; between violence, poverty, and health problems, dangers of death are their every day life. 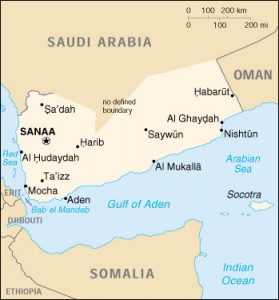 In Yemen, the poorest country of the Middle East, nearly one in two residents are living below the poverty line. The living conditions of residents can differ according to the region in which they live, for example the rural zones are always more discriminated than the urban zones.

In every case, children are the most vulnerable face of poverty. Their health, their well-being, and even their survival are seriously affected.

The infant mortality rate in Yemen is very high, and it is also not surprising that many newborns show inadequate weight at birth (30%). Births are a real problem in Yemen because they often happen outside of medical centers; it is very risky for the child as well as the mother.

Malnutrition is also one of the major problems in Yemen where it is seen in record numbers. The harmful consequences of malnutrition on the health of young Yemenis are numerous. For example, nearly one third of children between 2 and 5 years old suffer from serious retardation.

Children’s health is equally affected by inadequate access to water. The lack of hygiene and hydration largely supports the spread of epidemics, as well as the aggravation of illnesses that were previously benign. 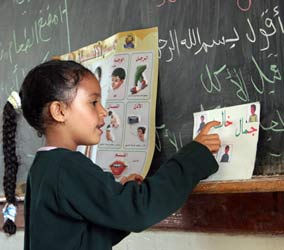 More than a quarter of children are not educated in Yemen, this lack of education affects girls more often than boys.

Furthermore, the establishments are seriously unhealthy, the structures are extremely insufficient and in poor condition. Consequentially, the children’s health and hygiene suffers in these schools, where very often there are no bathrooms or recreational areas.

The presence of armed forces in the country makes travel to school difficult and dangerous. The children are terrified at the idea of crossing the roads in Yemen to go to school. The parents, who are often just as frightened as their children, often let them stay at home.

Schools are also the target of threats for the armed groups, who don’t hesitate to intimidate the opposing parties by pointing their guns at the schools.

To assure the security of the children, certain schools don’t have any choice except to close, preventing the children from enjoying their right to education.

Labor is an every day reality for around 23% of children between 5 and 14 years old in Yemen. The prevalence of forced labour in this country is all the more serious, as the abuse of these children is abundant. From sexual exploitation to slave treatment, these children are the objects of cruelty and malice. Their health, physical as well as mental, their security, and their development are drastically affected.

The demonstrations of Arab Spring have touched many children in Yemen. Some have even been slaughtered, close to their own home, or even on their way home from school.

The armed conflicts that regularly go off in this country systematically put their health and security in danger.

Furthermore, abuse of children within their family is frequent in Yemen. Some children are battered for one absurd reason or another, and the methods of violence are as various as they are cruel. Little girls are violated by members of their family. To escape these familiar acts of violence, children often run away from their homes and find themselves alone and without shelter. They therefore live in the poverty and atrocities of the streets.

The consequences of the climate of insecurity are also seen in the children’s behavior. The violence that they are faced with every day develops confusion and poor judgment in their spirits. They also develop violent and aggressive behaviors. Therefore, fights, for example, are very frequent in schools.

The trade of children is still present today in Yemen. Sometimes it is even the families that put their children in the trafficking networks.

These young children are then objects of the most expolitative trafficking. In particular there has recently been an increase in child sexual exploitation through certain practices such as child pornography and tourist marriage. Furthermore, other children see an abominable fate in the trafficking of organ transplants.

These serious violations of the numerous rights guaranteed by the International Convention of Children’s Rights are very rarely reported and practically never sanctioned. The principal motive of this impunity resides in the Yemeni legislation, which doesn’t cater for these types of crime. Finally, no specific protection of minors who are victims is implemented in this country.

The practice of child marriage is very current in Yemen, it’s estimated that more than 30% of young girls are married before the age of 18. The consequences are serious, all the more because these girls are very young (12-13 in some villages).

Pregnant at 15, the girls are living extremely hard lives and the delivery is sometimes fatal to them because of their young age.

Moreover, they don’t chose their husband and therefore often find themselves confronted with marital violence.  Far too young, they don’t have any input and can be forced to live with these despicable, violent, and loathsome men.

These customary practices are extremely widespread in Yemen. It’s estimated that one young girl in every 4 is subject to the excision during their youth.

The lack of hygiene and regulation of those that practice these excisions often leads to grave consequences for the health of these young girls. Frequently, infections, hemorrhages, or other problems associated with the operation follow this act.

Thousands of families look for refuge and security in the displaced person camps. Fleeing the violence in the north of the country, the people flood into these camps, which are trying their best to manage this large number of people.

In these zones, associations provide a lot of help to children in many ways. But nevertheless, their situation sometimes remains critical taking into particular account the serious trauma that they have been subjected to.

Besides, there are too many to be completely sustained and taken care of. Their health proves to be worrisome, malnutrition rages, and there is not access for all to education because the classes are overwhelmed. Even more, the lack of infrastructure leads to recurrent problems of hygiene and illness.

The situation is alarming in Yemen because nearly 80% of births are not officially declared to public authorities.  This disturbing percentage results partly from the costs of registering, which remain at a high level, despite the efforts of the country.

So, these children don’t have an official identity, or nationality. This will lead to very large difficulties for these people, because they can’t enjoy their rights as they are considered to be invisible in the eyes of society.

In Yemen, children don’t have any particular legislative protection. For example, a child forced to prostitute herself within the framework of the network of traffic that exploits it, can be commonly punished for the act of prostitution.

The country continues to execute minors in complete violation of the fundamental rights of minors. So, children stopped by police forces live in miserable circumstances, entirely mixed with the adult prisoners.