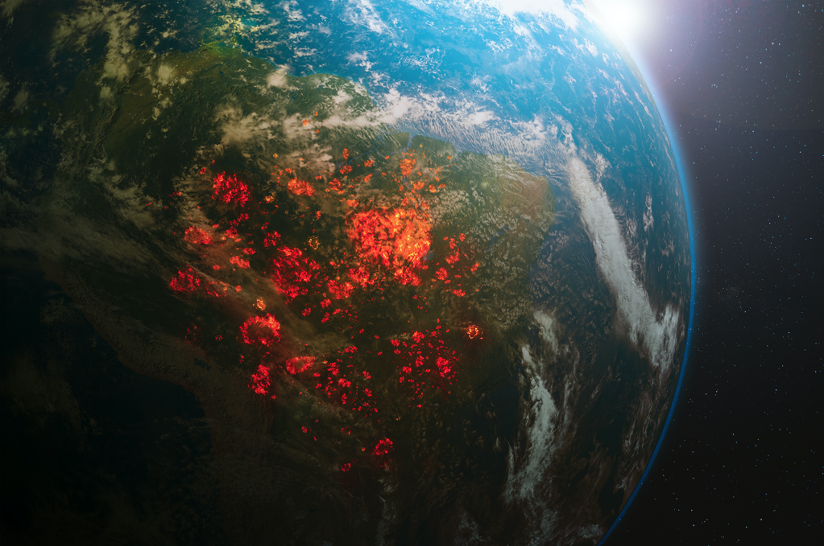 Amidst the global climate emergency, the Amazon rainforest is under imminent and intensifying threat. Unprecedented destruction of the rainforest since Jair Bolsonaro’s presidency is set to escalate even further this year, and with it the erosion of countless livelihoods and rights around the world.

The global crisis of the Coronavirus pandemic has seen the underfunded Amazonas region of Brazil particularly affected, with the Amazon rainforest – home to at least 10% of the world’s biodiversity – subject to increasing exploitation. In the first four months of 2020 alone, deforestation in the Amazon rainforest was 55% higher than last year where record deforestation was also reported (BBC, 2020).

Bolsonaro’s presidency and the Amazon rainforest under threat

Brazil’s anti-environmental President, Jair Bolsonaro, has called for the development of the rainforest and his Environmental Minister, Ricardo Salles, was recently revealed to see the Coronavirus pandemic as an opportunity to advocate for further environmental deregulation, since media are “only talking about COVID-19”; whilst at the time of writing 829,000 Brazilians were suffering from the virus (Spring, 2020). Rainforest loss has reached an 11-year-high since Bolsonaro took office in January 2019, with almost 10,000 square kilometres destroyed by August 2019; a clearance rate of 2 football fields per minute (Watts, 2019) and images of wildfires devastating the landscape making news headlines worldwide. Since then, rates of respiratory diseases in children living in Amazonia have increased due to toxic air pollution from forest burning.

Bolsonaro’s words and actions have weakened federal environmental agencies, undercut environmental law enforcement, harshly criticised and endangered those working to preserve the rainforest and ultimately given the “green light” to criminal logging networks (Human Rights Watch, 2019). The struggle for the preservation, or exploitation, of the rainforest is increasingly ferocious.

The Amazon rainforest expands across nine South American countries, with over 60% of it being in Brazil (and over 90% of the states of Suriname, French Guiana and Guyana being rainforest terrain). Deforestation, illegal mining, land clearances, wildfires and ensuing degradation of forest ecosystems combine to contribute to the decimation of the world’s biggest terrestrial carbon sink, home the greatest variety of species on the planet, with a fifth of the forest now emitting more carbon than it absorbs, contributing to the rapid escalation of the global climate emergency (BBC, 2020).

According to NGO Amazon Watch, the principal companies financing the deforestation of the Amazon rainforest include BlackRock, BNP, JPMorgan Chase, HSBC, Santander and JBS, with the Guardian revealing in 2020 that British-based banks and finance houses also gave over $2bn to Brazilian beef corporations implicated in deforestation (Howard, 2020). The responsibility of multinational corporations as well as politicians and nation states must be imperatively engaged, with them being held to account in order to preserve what remains of the lungs of the Earth, its persecuted indigenous populations and the current and future generations of planet Earth. Individuals everywhere have the collective power and responsibility to demand such accountability.

Indigenous and child rights in the Amazon

The implications of the Amazon’s destruction are planetary, but are the most keenly felt by indigenous people whose territories are stolen and destroyed, and whose rights are routinely violated. The gravity of the danger faced by indigenous populations has led a petition to be brought against Jair Bolsonaro before the International Criminal Court, demanding an investigation into attacks on indigenous human rights and asserting that indigenous peoples in the Amazon rainforest are put at risk of ethnocide and genocide by Bolsonaro’s socio-environmental policies (Branford, 2020).

Uncontacted indigenous people such as the Moxihatetea are under particular assault, and deforestation in the most affected Amazon indigenous territories increased by 80% in the past year, indicating an unprecedented threat to the lives, existence and fundamental rights of the Amazon’s indigenous peoples.

“The Whites cannot destroy our house for, if they do, things will not end well for the whole world. We are looking after the forest for everyone, not just for the Yanomami and the isolated peoples. We work with our shamans who understand these things well, who possess wisdom that comes from contact with the land.”

Furthermore, indigenous adults and children striving to protect their home in the rainforest are too often made to pay with their lives, with the murder of indigenous leaders in Brazil’s Amazon reaching a two-decade high in 2019 after the body of a 15-year-old Erisvan Guajajara was found (Hanbury, 2019). Children, indigenous people, human and environmental rights defenders are the key active stakeholders in rainforest preservation, sometimes considered “guardians” of the forest, and are also at the greatest risk of violence.

More than 300 people have been killed over the last decade due to conflicts over land and resources in the rainforest, with even more people experiencing violence and death threats with impunity as documented by Human Rights Watch (HRW) in its September 2019 report Rainforest Mafias: How Violence and Impunity Fuel Deforestation in Brazil’s Amazon, with HRW later labelling the destruction a ‘public security emergency’ (Human Rights Watch, 2020). In response to the murder of an indigenous leader Emrya Wajãpi, the UN High Commissioner for Human Rights, Michelle Bachelet, called on the Brazilian government to take on a more decisive action, stating:

“‘Effective measures should be taken to save lives & physical integrity of the Waiapi people. I urge the Government to act decisively to halt invasion of indigenous territories and ensure their collective rights to their land.”

The fight to protect the Amazon rainforest and to stall the climate emergency is therefore intrinsically and inextricably tied to the fight for the respect of children’s and indigenous people’s rights. Environmental rights and human rights are intimately interdependent, and the acquisition of justice in the Amazon rainforest is more important now than ever before.

Humanium is committed to working for the urgent and sustainable improvement of children’s environmental rights. We are proud to have partnered with the Children’s Environmental Rights Initiative and are also an active participant in a joint-NGO Working Group on Child Rights and the Environment engaging UN mechanisms for the fulfilment of child rights, and our emergency relief project in Rwanda aims to mitigate the impact of Coronavirus on children and families at this pivotal time.

WATTS, Jonathan (2020) Amazon deforestation ‘at highest level in a decade’, The Guardian.

MUNOZ Cesar (2019) Brazil’s Amazon – and Its Defenders – Are Under Attack From Illegal Loggers, Human Rights Watch.

PHILLIPS Dom and Daniel Camargos (2020) Forest fire season is coming. How can we stop the Amazon burning?, The Guardian.

PHILLIPS Dom (2020) Studies add to alarm over deforestation in Brazil under Bolsonaro, The Guardian.

UNIVERSAL RIGHTS GROUP (2019) The Amazon fires: the burning of rights.