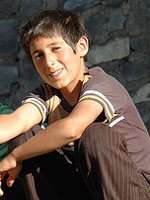 Azerbaijan, one of the most densely populated countries of the Caucasus, has known troubled times. Despite improvements in the status and welfare of children, there are several areas where criticisms can still be made. Such areas include the right to education, the right to protection, health and other basic requirements. These basic rights are unfortunately not guaranteed for each and every child.

Despite a relatively stable economic situation, the nation’s wealth, which is largely drawn from the oil industry, does not reach the majority of the population. Many families are impoverished and fight a daily battle to ensure the well-being of their children.

The implementation of their rights is characterised by pitfalls. Many infringements to the principles of the Convention on the Rights of the Child (CRC) prevent children from enjoying their rights fully.

Majority of the population suffer from vitamin A deficiency and as a result many are born with mental health issues (approximately 20, 000 per year). There are also certain vaccination storage company who do not adhere to vital sanitary conditions and this often leads to illness in children who receive such vaccinations.

Poorer families have restricted access to treatments and they find themselves being unable to provide a well balanced diet for their children. The result is that 10% of babies are underweight at birth.

There are approximately 20, 000 children who are not under parental care in Azerbaijan. Whether they are placed in orphanages or living on the streets, these children often face unbearable living conditions.

Though the parents of a majority of them are still alive, such children find themselves being “social orphans” due to poverty or ill-treatment and abuse in their family.

Once in public care, they may find themselves victims of both emotional and physical violence and they may also be at risk of being sexually abused. Further, access to education, health care and other services are limited to such unaccompanied minors.

The region of Nagorny Karabakh, though geographically situated in Azerbaijan but controlled by Armenia, is at the centre of great tensions between the two countries. This conflict regarding ownership is far from being effectively resolved and it is unfortunate to note that it is children who mostly suffer as they find themselves caught up in the fight.

The right to protection, despite being ensured in the CRC, is not respected and therefore children from these regions live in insecurity and danger. In addition, some are killed in conflict as well.

With some families fleeing to avoid the conflict in this region, children find themselves in precarious situations as sudden destabilising changes greatly affect the well-being of children.

In Azerbaijan more than a quarter of children do not attend school. Schooling entails hidden costs and the economic instability of some families prevents them from enrolling their children in schools.

Some children face difficulties in accessing education for several other reasons as well. For example, despite it being a public service, education is ill-adapted to cater to the needs of child refugees or children with disabilities. Even if they succeed in enrolling at school, such children are often victims of discrimination. 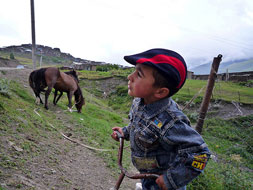 Further, if children do not attend school, they can be of use to the family for they may provide another source of financial income if they are to find a job. For example, in more remote regions of the country, young boys may be employed in the agricultural and livestock sector.

In addition, the quality of education provided in some schools is unacceptable. Insufficient workbooks, crumbling buildings, under qualified teachers etc. are some of the problems that can be visibly perceived.

Violence at home is a relatively widespread phenomenon in Azerbaijan. Many children, particularly females, are often abuse at home. Hence, one may draw the conclusion that though legislation is in place to prevent such occurrences, it is not effective.

Furthermore, help and other aid services for victims of violence are inadequate. Unfortunately, this leads to children who are subject to such abuse having to live with it with almost no means of escape. They therefore, often suffer in silence.

Despite recent efforts to tackle the problem, Azerbaijan has seen a sudden increase in sexual violence affecting children in recent years. As a result, many children suffer various forms of sexual abuse. Some may even be forced to enter the sex trafficking industry and face sexual exploitation. Children are not adequately protected from sexual predators and they are therefore susceptible to serious forms of abuse.

Acts of sexual abuse are becoming more and more difficult to detect and prove due to the increased access to technology by sexual predators, especially the internet. This is a testament as to why the nation needs to improve their awareness campaign as soon as possible for this could assist in reducing the number of tragic incidents which harm both the mental and physical health of such children.

In Azerbaijan more than 10% of girls are married before the age of 18 as they begin marital preparations at a very young age. Such early marriages have grave consequences on the health of young girls as, at such a tender age, they do not understand the implications of marriage.