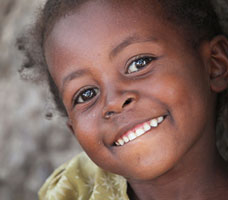 Madagascar is far from the tropical paradise it appears to be. It is a country where the rights of the child remain unfulfilled and incomplete: Malagasy children are confronted by poverty every day.

The current and lasting political crisis, sparked by a coup d’état in 2009, has greatly aggravated the situation. Repercussions from the crisis are taking a heavy toll on the people: according to the International Labour Office (ILO), more than 200,000 jobs have been cut in the capital city of Antananarivo alone. The State has slashed its education and health budgets. Malagasy children and their families are forced to live in these circumstances—or rather, survive. The percentage of people living beneath the poverty line has dramatically increased: from 75.3% in 2010, to 81% in 2012, and it’s currently at 92%, or nine in ten Malagasies. Based on this measurement, Madagascar is now the poorest country in the world.

Such a sudden socioeconomic degradation has presented a critical problem for children, whose fundamental rights are deprived and violated by the lack of access to food, education, and health care.

In 2012, according to UNICEF estimates, 82% of children under the age of 18 were living below the poverty line. These children and their families live in extreme destitution, and cannot meet their most basic needs. Poverty is especially rampant in rural areas, where close to 70% of the population lives, mostly in remote and isolated areas without basic infrastructure (such as access to drinking water, sanitation services, or schools). Only 46% of the population has access to drinking water, and only 15% have an adequate sanitary system.

In addition, the island is one of the six most vulnerable countries in the world to climate change. It is plagued not only by cyclones, but also by droughts and locust invasions in the southern part of the country. These phenomena send the local populations spiraling into chaos. As a result, poor families become even more vulnerable and cannot protect their children. The rights of these children are often pushed to the background in light of survival attempts.

According to the World Bank, one of the consequences of such poverty is that one in four Malagasy children aged 5 to 17 have to work in order to support their families. Normally they help their parents work the fields. Sometimes, families send their children—mainly their daughters—to work as servants in the city for richer families that may promise to send them to school.

25% of these child laborers perform jobs that pose health risks.. The United Nations (UN) recently denounced the poverty and impunity that has helped a modern version of slavery develop in Madagascar. It includes forced marriages and children being forced to work in mines and stone quarries. In addition, children who work in mines risk physical abuse, sexual exploitation, and respiratory illnesses, all of which can be fatal.

The Committee on the Rights of the Child is concerned with another rising phenomenon linked to this type of slavery: human trafficking, especially of children, from Madagascar to the Middle East and other neighboring countries “for domestic servitude and sexual exploitation.”

Young girls make up a large number of sex workers. Unfortunately, there is a booming trade in sexual tourism in Madagascar. On July 29, 2013, the UN denounced how commonplace it has become to sexually exploit children in Madagascar, and the impunity of those responsible.

The government hasn’t really taken any effective steps to combat this trafficking. Sometimes, a community or even parents themselves will turn a blind eye, or even accept such exploitation, since it provides a source of income. This can also lead to physical abuse.

The Committee on the Rights of the Child laments the increase in such interfamilial violence, which includes sexual violence, especially towards girls, which goes unpunished either by the courts or by society itself. Each year, over one thousand children disappear in Antananarivo, the capital of Madagascar. These children leave their homes because they are likely to be beaten by family members. Many end up living on the streets.

The Right to Health Care
Unhygienic conditions and non-potable water frequently lead to diarrhea and related illnesses. Children under 5 years old are the most susceptible: there is a mortality rate of 62 per thousand, a large number. Cases of malaria have been increasing, and it remains the primary cause of death among children.

Very few medical infrastructures exist in rural regions of Madagascar, and most of the population does not have access to basic health care. The national health care budget has been cut considerably during the political crisis; some basic health care centers have been closed, very little medicine is available, and there is a serious lack of trained health care personnel.

Adolescents in Madagascar have a significant problem with sexually transmitted diseases (STDs), although, paradoxically, the number of people infected with AIDS is particularly low compared to other African countries. Large-scale prevention campaigns are organized every year to instill the knowledge of basic protection against STDs in young Malagasies.

The Right to Food
Another serious health problem has arisen with the political crisis: 4 million Malagasies don’t know where their next meal will come from, a problem which affects children even more strongly.

50% of children under the age of 5 suffer from endemic and chronic malnutrition, especially in the southern part of the country: 24% of them are less than 6 months old. Such figures mean that Madagascar is the sixth-worst country in the world for growth.
The United Nations Special Rapporteur on the Right to Food has sounded the alarm: the political crisis is threatening to exacerbate the problem in Madagascar, especially if international aid organizations cut their support, like the World Food Programme, which has suspended its funding of school cafeterias.

Right to an Education

Only 66% of children finish primary school, which is explained by the low attendance rate and the high dropout rate, especially among girls. The political crisis of 2009 has dramatically slowed the government’s progress: the education budget has been reduced, while qualified personnel and infrastructure are still lacking in Madagascar, particularly in rural areas.

14.2% of children have never attended school.

Still, these rates are slightly better than the rest of Africa: in particular, Madagascar shows less discrimination towards girls attending school.

In some rural regions, schools only offer two to three years of instruction, because of makeshift shelters or a lack of staff.

Practices based on traditions and customs still exist which are detrimental to children’s rights, including forced marriages and abandoning twins.

48% of women aged 20-24 years old in Madagascar were married before the age of 18. In 2007, the minimum legal age of marriage was set at 18 years for girls, instead of 14 years like it once was. Despite this reform, however, many girls—and also boys—are forced to marry against their will, occasionally as young as 10 years old.

Some young girls are married to much older men. When they are widowed, they are discriminated against and excluded from society.

More than one quarter of women in Madagascar become mothers for the first time between the ages of 15 and 19, which poses a threat to the health of both the mother and child during delivery.

No judicial process exists that deals specifically with minors; children, including girls, are not held separately from adults in detention centers. Judges, prosecutors, and other judicial professionals are not trained to handle minors in the justice system. In addition, prisons are overpopulated, and living conditions there (violence and a lack of food and health care) are extremely difficult for minors, who are sometimes as young as 14 years old.