A small state located between two powers in full development (India and China), Bhutan has shown itself to be very discreet on the international level. Yet, in this country despite the indisputable progress, the rights of children still have a lot of ground to cover before being fully acknowledged and effective. 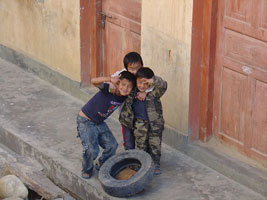 Almost a quarter of the population in Bhutan live under the poverty line. In addition, the Gross National Income (GNI) is extremely low. It is believed that the Gorss National Income is about 10 times lower than that of Portugal, though it isn’t confirmed by offical sources.

Many children suffer from consequences of poverty, notably in the areas of health, education and work…Children living in rural regions are more affected than those in urban areas.

Despite the recent efforts of the country in this regard, the situation of disabled children is fragile. They are still put on the margins of society and do not enjoy all the rights that should be recognized. The services of specialized organizations for disabled children are largely inadequate. Also, their rights are not adequately protected and access to public services is limited. These children face difficulties in the areas of education, health care etc.

The Bhutanese nationality is very difficult to acquire, as it requires the two parents to be Bhutanese. Thus, many children that are born and live in Bhutan are not nationals. Some of them are stateless, synonymous with great difficulties in exercising their rights.

Moreover, migrant children are objects of discrimination by the Bhutanese. They face a number of obstacles preventing them from benefiting from public services. Thus, their rights to education, health and nationality are not fully guaranteed. 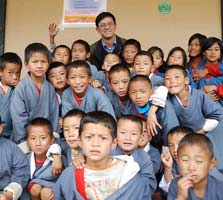 In Bhutan, more than one in ten children are not educated. Yet, the Bhutanese have put into place certain methods of improving enrollment, specifically free primary school education. Unfortunately, additional fees and costs caused by informal education of children are still too high. Some parents cannot financially ensure the education of their children.

In addition, school is not mandatory. The poorest families prefer to have their children work and earn an income, rather than send them to school, where they are economically useless.

The number of people infected with HIV in Bhutan is increasing. Prevention measures and awareness on the subject are insufficient. Thus, mothers, not aware, continue to transmit the virus to their children.

In addition, the methods of contraception are not often used in advance, resulting in the diffusion of HIV and also the undesired pregnancies among young girls. 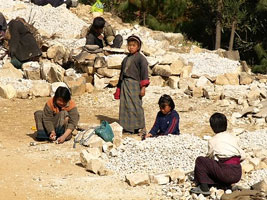 Though the legal working age is 18 years old, close to one out of every five children are required to work to support their families in Bhutan. Many face very difficult conditions of labor in fields and workshops.

Sexual exploitation of children is equally very worrying in this country where sexual consent does not have an age requirement. Thus, the trafficking of children is freer and sex trade is difficult to eradicate.

The guarantee and the respect of minority rights, protected by the CRC, is a concern in Bhutan. In effect, this country does not sufficiently protect the groups of minorities like it does the Nepalese, an extremely present group in Bhutan. Moreover, the children are victims of discrimination. Their rights to have and follow their customs, religions, and linguistic traditions are constantly violated. They are not properly integrated into the rest of the population and do not have equal access to public services.

Bodily punishment is not explicitly restricted in Bhutan. Thus, many children are already victims of poor treatment in the context of family life as well as in school. The Committee on the Rights of the Child has thus expressed concern of the Bhutanese legislation that does not have a way of guaranteeing the protection of children, under the Convention on the Rights of the Child. Certain monasteries are sites of bodily punishment on young monks that live there.

That being said, the case of poor treatment and abuse of children in their families is far too common. In addition, support and monitoring of these child victims are uncertain.