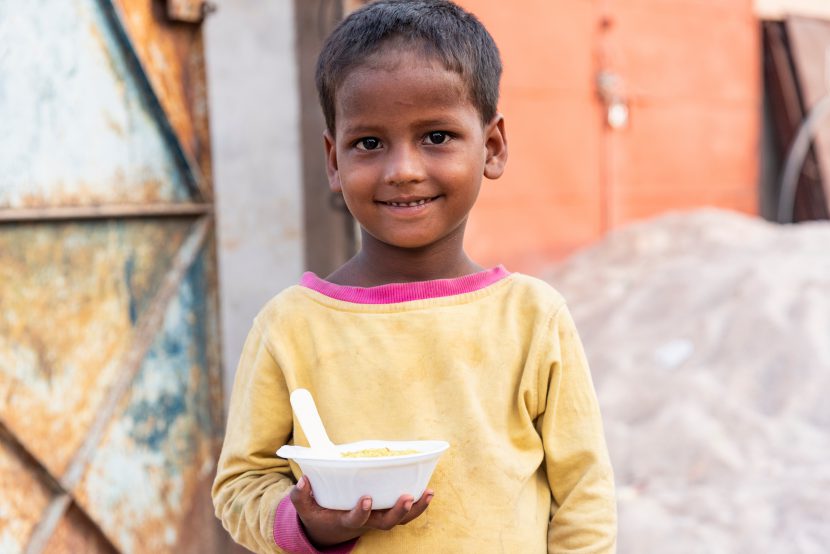 Malnutrition amongst children under the age of five is a doorway to a life landmarked with cognitive and physical setbacks. With words like ‘consumerism’ and ‘food surplus’ headlining the world today, high levels of malnutrition shine light on the harsh truth of inequality, lack of access and poverty that continue to affect the lives of millions around the globe.

Up until the age of five, proper nutrition is key in establishing a healthy foundation for one’s life course. The reality that India is confronted with is a sad irony- despite being the second-largest food producer in the world, malnutrition, especially amongst children, remains a large roadblock in the country’s journey forward.

Malnutrition has to do with deficiencies, excesses or imbalances when concerned with a person’s intake of nutrients and/or energy. It can be classified in two broad categories of conditions. The first comes under ‘undernutrition’ which deals with a lack of healthy nutrients that can result in stopping growth, both internally as well as on the outside, for example stunting, underweight. The second group that has to do with excessive food intake and issues such as obesity, diabetes, heart diseases falls under that category of malnutrition. (WHO, 2020)

There is not a single country in the world today that does not have to deal with malnutrition as a rising or persisting issue. (WHO, 2020) Within the framework of those affected, around 159 million children under the age of five are stunted, 50 million are wasted (when a child is too thin for their height due to rapid weight loss or inability to gain weight) (UNICEF / WHO / World Bank Group, 2019) and 41 million are overweight or obese (WHO, 2020). There are numerous contributing factors that result in malnutrition, a few of which are inadequate breastfeeding, lack of access to proper nutritious food (particularly when food prices rise) and infection of various kinds (WHO, n.d.).

Why Is Early Nutrition Crucial to a Child’s Proper Development?

The human body is resilient and deserves admiration for its ability to adapt to different conditions and environments. That being said, access to proper nutrition in the early stages of life is vital and is known to lower health risks throughout the course of one’s life as well as prevent noncommunicable diseases (NCDs) (UNICEF, 2019).

The early stage of life is a time of swift mental and physical development. A specifically important window are the first 1000 days of one’s life- starting as a fetus in the womb up until the child’s second birthday. Breastmilk at this time, is essential, and has a deeply positive impact on children, resulting in both brain development as well as improved immune systems. It is tailored to meet the needs of the child and can reduce the risk of death, to the extent that annually, universal breastfeeding can save the lives of 820,000 children under the age of five globally (UNICEF, 2019).

The prevalence of malnutrition and its detrimental effects on children in India is alarming. In a report published by UNICEF , it was noted that malnutrition was the cause of 69% of deaths of children under the age of five in India, additionally noting that within the under-five age bracket, every second child suffers from some form of malnutrition  (Economic Times, 2019).

Stunting, a major point of concern for India, can result in irreparable physical damage in children and apart from the physical suffering caused by undernutrition, it is known to deter brain development which in turn results in numerous drawbacks- diminished mental ability and increased risks of nutrition-related chronic diseases being just two examples (UNICEF, n.d.).

Open defecation is in fact one of the main contributors to malnutrition (Singh, 2020). A reality for the poorest sections of society, it can result in tons of feces every day, to which children are exposed to through direct contact (UNICEF, n.d.). The possibilities of catching and spreading waterborne or diarrheal diseases are intensified due to unavailability of clean and safe water in homes and lack of regular handwashing. This has led to nearly 10,000 diarrheal deaths amongst children under the age of five in India (UNICEF, n.d.).

Efforts and Measures to Tackle Malnutrition

In curbing open defecation, India’s progress has been commendable. In 2015, around 568 million people practiced open defecation in public spaces because of a lack of access to toilets (UNICEF, n.d.) . By 2019, the number of people without access to toilets decreased by an estimated 450 million as a result of the Prime Minister’s Swachh Bharat Mission done in partnership with UNICEF (UNICEF, n.d.) .

Another government scheme to tackle the prevalence of malnutrition is the National Nutrition Mission or POSHAN Abhiyaan , which was introduced by the Prime Minister in 2018. (NITI Aayog, n.d.) . The Mission focusses on improving sanitation and hygiene conditions, anemia, antenatal care and optimal breastfeeding, amongst other issues, for over 130 million children. (NITI Aayog, n.d.).

Additionally, UNICEF continues supporting both the central as well as the state governments by implementing essential nutritional programs for children which cover counselling caregivers, monitoring progress in dietary diversity, policy advocacy and communication strategies among others (UNICEF, n.d.).

What Can You Do to Help Combat Child Malnutrition?

Malnutrition amongst children in India continues to be an endemic issue despite huge improvements in the past few years. With an abundance of resources and rapidly evolving technology, access to proper nutrients for every child seems like a feasible possibility. Children continue to be the world’s hope for a brighter, safer future and there must be a global effort in eradicating a problem that stops them from reaching their maximum levels of physical and mental potential.

Humanium is constantly working on projects improving child rights in India. As an organization, we are supporting our local partner, Hand in Hand India, in running the Residential Special Training Center in Madhya Pradesh, India, hosting 55 former girl child laborers, which, along with other centers and schools in India, got temporarily closed during the pandemic. The goal of the ‘Residential Special Training Centre’ project is to end child labor through education, offer child laborers tailored support, and ultimately to reintegrate the children into public schools.

Although aimed at education, this project is an invaluable chance to change the life of Indian children in numerous aspects, including ending malnutrition and child labor in a country where this practice is still very common. If you would like to support Humanium in its work, please consider sponsoring a child, making a donation or becoming a volunteer.

UNICEF. (n.d.). India: What we do/Stop stunting. Retrieved from UNICEF.

WHO. (n.d.). Maternal_child_adolescent. Retrieved from WHO.