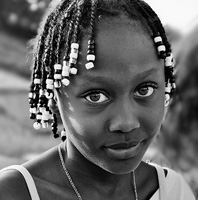 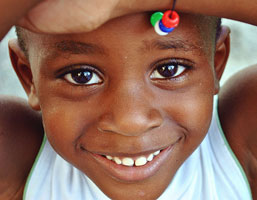 Known for violence on a daily basis, Jamaica is frequently criticized for its lack in upholding human rights. However, the country has progressed steadily in regards to these rights, in particular by adopting the Convention on the Rights of Children (CRC) along with the law to care for and protect minors.

The economy in Jamaica relies mainly on the service sector, as it represents 60% of its GDP. Tourism is the most lucrative sector for the country welcoming an average of two million visitors per year.

Unfortunately, the luxurious tourist resorts on the island do not represent the reality of the country and its 2.8 million residents living in poverty. The high rate of unemployment in Jamaica elevates the instability of the population as well as crime and gang problems, particularly drugs.

Despite its progress, Jamaica has yet to tackle many challenges so that it can offer every child equal opportunities in accessing education. Minors living in disadvantaged rural and suburban areas have much lower chances of being able to attend school.

The main problem is simple: in Jamaica, primary schools are free, but you must pay for secondary or higher education, the fees of which are too high for many underprivileged children. As a result, many Jamaican children who are achieving good results at the primary level are unable to pursue further education. Not only is access to education an issue, but a lack in general classroom equipment also adds to the inability for children to strive in any educational setting.

The education system in Jamaica is yet to make progress in order to offer every child equal opportunities to study and, of course, excel.

When Jamaican children are forced to live on the streets, it is mainly due to HIV/AIDS, which is wreaking havoc in Jamaica. There are many street children who have become orphans due to their parents contracting the virus.

Poverty, violence or even migration also explains the marginalization of these children. As they are neglected and left to fend for themselves, they quickly become easy targets for gangs working in the country as the social system is too weak to help them get off the streets.

These children who do not have access to education are forced to work in order to provide for themselves. This puts their health at risk, all going against their basic human rights.

In addition, poverty forces some young girls into prostitution, particularly in the touristy areas of the island. Studies have, in fact, shown a significant number of minors offering their services in exchanges for money or even food. A survey by the International Labour Office highlighted that the youngest children to engage in prostitution are as young as ten years old.

Underage prostitutes on the street include orphans, children who regularly prostitute themselves, children who occasionally engage in prostitution, and other young people who are recruited as strippers or masseurs/euses.

These children are faced with many dangers: by not using condoms, they are put at an increased risk of unwanted pregnancy and sexually transmitted diseases, let alone the psychological trauma the children are put through.

Jamaica also has to face up to HIV/SIDA. In fact, despite many efforts made at an international level, it should be noted that the epidemic keeps on spreading. 10% of people who have contracted the disease are children younger than 18 years old (i.e. approximately 20,000 children out of which 5000 are orphans). In the majority of cases, it has been transmitted from the mother to the child.

The risk of exclusion and marginalization of these children is very high. Most of them will never be integrated into society.

In order to solve this problem, many actions have been implemented. Today, these children have increasingly been taken into care and are able to benefit from appropriate treatment. In addition, awareness campaigns for children are being spread in order to try and reduce unsafe sex.

With a crime and homicide rate higher than that of America, daily violence in Jamaica has a devastating effect on children.

Often they are stopped from freely attending school and/or participating in extracurricular activities, due to civil unrest. Young Jamaicans are traumatized and suffer from major psychological problems very early on due to having witnessed attacks, robberies and gang wars.

A lot is yet to be done to protect these children who have to suffer the consequences of impunity and corruption which has become all too common.

According to the United Nations, children in Jamaica are detained in the same prison cells as adults. In addition, children who need specific help or protection are not taken care of in the right way. Those who need psychiatric medical care virtually have no access to it. For example, many girls who have contracted HIV/AIDS have not even been seen by a doctor.