Namibia is a nation very rich in cultural diversity. Populated by many ethnic groups with widely differing customs, Namibia is facing many difficulties to guarantee the rights of all its children and allow them to live in freedom and dignity. 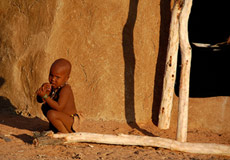 More than half the Namibian population lives below the poverty line, and a large proportion lives in extreme poverty. Children suffer seriously from this economic situation. The lack of financial resources has serious consequences for their survival. They are confronted daily with serious problems such as hunger and disease, and many are forced to work in very difficult conditions.

Indicators in Namibia show that many efforts are required to improve health care. Hospitals are scarce and overcrowded. In addition, water and cleaning equipment is inadequate compared to the number of children who need care. Consequently, diseases are spread very easily and seriously, and sometimes become fatal due to lack of hygiene. Children suffer enormously from this problem. Diseases like diarrhea constantly affect and weaken children.

Namibia is one of the most affected countries in the world by the AIDS virus. The rapid spread of the virus increases the vulnerability of children. They see most of the rights which are normally guaranteed by the International Child Rights Convention violated.

Mother-to-child transmission is common, despite the fact that many treatments are now available to eliminate the risk of such transmission.

Moreover, thousands of children become AIDS orphans. They are deprived of a normal and happy childhood.

Namibia is characterized by its ethnic and cultural diversity. Many people with different life-styles and beliefs live in its territory.

Some ethnic minorities are victims of discrimination. Children are the most vulnerable in this respect and suffer from restrictions to their rights and liberties. Their access to basic and essential services such as education and health care is sometimes complicated. Their differences are not always accepted by the rest of the population, and sometimes people even remind them of their ethnic background in a violent manner.

Certain populations live in remote areas. They live miles away from the cities without proper transport infrastructures. For that reason, the children cannot enjoy their rights. For instance, they cannot go to school because no schools exist in the area.

Children under 14 are not allowed to work under national legislation. However, it is estimated that more than 13% of children in Namibia are engaged in some form of employment.

The climate of poverty that exists in many households forces children to work in order to help provide for their family. Unfortunately, the working conditions are very hard and employees understand the vulnerability of the children and take the opportunity to exploit them. Many end up dropping out of school altogether. 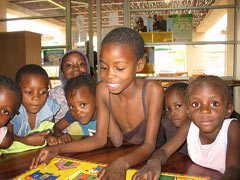 Attending school is compulsory until the age of 16 under national legislation. Yet, figures have shown that more than 1 in 10 children do not have the chance to go to school. The additional cost of education (books, uniforms, boarding costs etc.) constitutes the main obstacle to child education.

School infrastructures are very old and are unable to stand up to bad weather conditions, such as flooding. As a result it is very common to see some schools closed in the middle of the academic year. This can slow down children’s education.

One in 3 births is not officially registered in Namibia. Children without official identity are more vulnerable to problems such as violence and disease. Moreover, they face many obstacles to have access to basic welfare and public services like schools.  Since they have not been registered, they do not exist in the eyes of society. 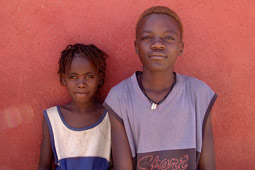 Child abuse represents a serious concern in Namibia. Cases such as mistreatment, abuse, rape and even infanticide are increasing.

The right to protection, guaranteed by the International Convention on Child Rights, is violated. Namibian children live in constant fear of abuse, even inside their own homes.