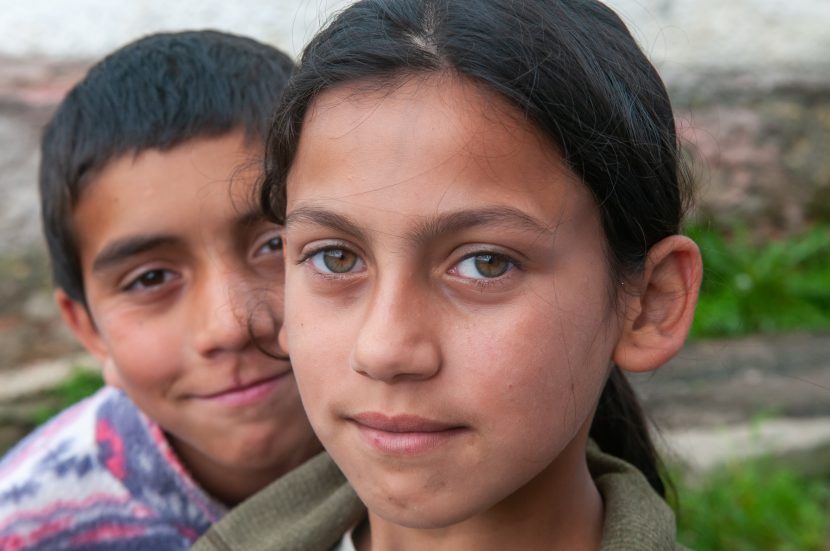 Roma children are discriminated against twice because of their affiliation to two marginalised groups: children and Roma. As members of the Roma community, they are subject to systematic discriminatory practices and policies across Europe, which affect them by the simple reason of their ethnic group. As children, their voices and needs are overlooked, sometimes in favour of their parents’ rights and other times in favour of non-Roma interests.

Roma are the largest and most marginalised ethnic minority group in Central and Eastern Europe (European Commission, 2004).The estimated Roma population in Europe (EU) is unclear: on one hand, the fear of stigmatisation and discrimination pushes hundreds of thousands of people to do not identify themselves as Roma (Peleg, 2018), and on the other, the umbrella-term “Roma” encompasses different groups, including Roma, Sinti, Kale, Romanichels, Boyash/Rudari, Ashkali, Egyptians, Yenish, Dom, Lom, Rom and Abdal, as well as Traveller populations (gens du voyage, Gypsies, Camminanti, etc.) (Lecerf, 2021).

Moving from these premises, about10 to 12 million Roma live in Europe, of which approximately 6 million are citizens or residents of the EU (Council of Europe’s website). Bulgaria, Romania and Hungary are the three countries with the highest percentages (9.94 per cent, 8.63 per cent and 7.49 per cent of the total population, respectively) (Council of Europe, 2012).

The human rights of Roma are violated on a daily basis (Kostadinove, 2011). In most of the cases, Roma live in poor and disadvantaged communities characterised by high unemployment rates (Ringold et al., 2011), poor hygiene conditions, lack of running water and scarcity or lack of socio-educational services. The figures on education are alarming too. According to the World Bank, the average gap in primary school enrolment for Roma children is a quarter of the corresponding rate for non-Roma children, and only 64 per cent of Roma girls attend school, in comparison with 96 per cent of girls who come from similar socio-economic backgrounds elsewhere in Central and Eastern Europe (Peleg, 2018).

Roma children are racially discriminated in school systems all across Eastern Europe, mainly by one of three means: being placed in ‘special needs’ schools; classroom segregation in the same school; or residential school segregation, where non-Roma parents do not send their children to school within Roma populated areas (European Roma Rights Centre, 2004).

Over the years, the European Court of Human Rights (ECtHR) has ruled over several cases concerning discrimination against Roma children in education and the following section has the ambition to point out some of the main cases related to this specific branch of Human Rights Law.

The invisibility of Roma children in the ECtHR’s narrative

The parents were French speakers and they claimed that in their Dutch-speaking region, there were no adequate schools that offered teaching in the French language and that the authorities prevented them from sending their children to French-speaking schools outside their local area, thus forcing them to either enrol their children into local schools in which the language of education was Dutch. For these reasons, the parents alleged a violation of their right to family life (Article 8) and the right to education in conjunction with the right to non-discrimination (Article 2 Protocol 1 and Article 14).

In their submissions, the parents referred to the rights of their children, arguing that one of the aims of education is to develop children’s intellect and culture, which includes linguistic skills (Peleg, 2018). On the other hand, the Belgium Government argued that the right to education in one’s own language is not protected by the European Convention on Human Rights (ECHR) or its Protocols. Moreover, given the fact that the parents did not belong to a national minority, Article 14 could not be applied.

The Court decided that, although Article 2 Protocol 1 is formulated in negative terms, it nevertheless enshrines a positive right. In fact, without establishing positive obligations, including the duty to ensure access to education, the right to education would essentially be meaningless and so ensuring children’ access to education createsa corresponding duty for the state to respect parents’ linguistic preferences. The Court added that it would be absurd not to recognise this obligation and to prevent certain students from being educated in their language of choice based on their place of residence (Belgian Linguistics Case, 1968).

Although the applicants’ submission described children as rights-holders, children’s views on the matter were not taken into account. Of course, parents’ decisions have an impact on children’s education, but the first responsibility when it comes to education remains on the State. In this case, the Court missed the chance to identify children as rights-holders, but at least the Court did mention that the case involved ‘the rights or freedoms of a child’(Belgian Linguistics Case, 1968).

A movement to fight discrimination against Roma children

The adoption of the UN Convention on the Rights of the Child by the UN General Assembly in 1989 marked a turning point for the recognition of children’s rights and for the fight against Roma children’s discrimination in education. In fact, this change corresponds with the rise of a ‘European movement’ to fight discrimination, greater awareness of the marginalisation of Roma (Declour and Hustinx, 2015), and the joining of Eastern European countries to the Council of Europe, which brought more Roma under the jurisdiction of the ECtHR (Peleg, 2018).

A case that marks a radical shift in the Court’s treatment of minority children’s right is the 2007 case of DH v Czech Republic (2007). This case involved eighteen Roma children, Czech nationals, who argued that they were subject to a segregation policy where Roma children were being sent to schools for children with special needs. The assessment of the special needs was conducted through some diagnostic tests which were unsuitable for Roma children on linguistic and cultural grounds and sometimes there was not even a prior diagnosis.

In this case, the children were the applicants, and they argued that the policy at stake violated their individual right to education. On the other hand, the Czech Republic denied the existence of any segregation policy and claimed that all decisions were made for pedagogical reasons.

In the first degree of judgement, the Chamber, in a majority of 6:1, found that there was no violation of the children’s rights (Case DH, 2007), but on appeal, the Grand Chamber found, in a majority decision of 13:4, that the children’s rights had been violated, and that they were subject to a discriminatory policy that had the sole objective of separating children based on their ethnicity and race. The Grand Chamber ruled that there was a policy that disproportionally placed Roma children in special needs schools by referring to statistical data.

Moreover, the Grand Chamber underlined the State’s obligation to protect the identity and lifestyle of Roma children as they are part of a minority group. The Grand Chamber also rejected the claim that sending Roma children to special needs schools was the proper response to their poor education outcomes, stating that, as members of a minority group that suffered from continuing institutional neglect and discrimination, it was inevitable that these children would have poor results in school. But their low marks were not an indication of any special learning needs, but rather relevant to the State’s duty to adequately protect their right to education without discrimination (Case DH, 2007).

DH case is a rare example in ECtHR’s jurisprudence on the matter of discrimination of Roma children in education for two main reasons: first, because the arguments used by the Court are framed in relation to the applicants’ rights (the Court referred to Articles 28 and 30 of the UNCRC to support its conclusion that children’s rights were violated) (Case DH, 2007), and second, because the Court directly addressed racial discrimination in schools from a children’s rights perspective, considering them as rights-holders. In many other cases on the issue of discrimination of Roma children in education, the ECtHR did not show the same awareness and ambition in recognizing children’s rights.

For instance, the case of Sampanis v Greece (2008) involved eleven applicants, adults of Greek nationality with Roma origin. Despite a formal governmental policy that encouraged Roma children to enrol in the national education system, the applicants claimed that their children were subject to a segregation policy. At first the parents were denied the opportunity to enrol their children in the local schools.

Once this obstacle was removed, parents of non-Roma children started boycotting classes that Roma children attended. The headmaster therefore decided to place the applicants’ children in a separate building annexed to the school, where they were taught by less qualified teachers and using a different, lower standard, curriculum. The Greek Government justified this procedure by claiming that the motivation to separate the applicants was not racial, but rather pedagogical, arguing that separate education would better prepare them for the future.

The ECtHR found that there were no objective or reasonable justifications for the discrimination against the applicants’ children, and therefore the policy in question violated the right to non-discrimination in conjunction with the right to education. However, unlike the case of DH, the judgment did not refer to the children as rights-holders but rather focused on the violation of the parents’ rights (Kosko, 2010).

The importance of recognizing the intersectionality of Roma children

The cases analysed in the previous section highlights that separating Roma children from their peers constitutes a violation of the right to education, in conjunction with the right to non-discrimination. Nevertheless, it seems that the Court is more concerned with the rights of parents and the social positioning of Roma communities (Peleg, 2018).

This kind of approach overlooks the unique vulnerability of minority children, which is rooted in their affiliation to two marginalized groups: children and Roma. Instead of recognizing the intersectionality of Roma children’s marginalization and recognizing that their rights are being violated due to these dual affiliations, these children are being discriminated two times: one against by their national government due to their ethnic origin and race, and one by the ECtHR due to their age.

Roma children’s experiences in relation to their education should be understood in the light of their overlapping and intersecting social positions as both Roma people and as children. As mentioned before, as members of the Roma minority, Roma children are subject to systematic discriminatory practices and policies across Europe, which are not limited to the field of education. Moreover, as children their voices are rarely respected or taken into account, and their human rights are consistently overlooked by national governments and the ECtHR.

Recognising the intersectionality of Roma children’s is essential to promoting their rights and we at Humanium are strongly engaged in this goal. Join Humanium by sponsoring a child, making a donation, or becoming a member or a volunteer!

European Roma Rights Centre (2004), Stigmata: Segregated Schooling of Roma in Central and Eastern Europe. Retrieved from: http://www.errc.org/reports-and-submissions/stigmata-segregated-schooling-of-roma-in-central-and-eastern-europe, accessed on 28 May 2022.

Roma people in the EU. Retrieved from https://ec.europa.eu/info/policies/justice-and-fundamental-rights/combatting-discrimination/roma-eu/roma-equality-inclusion-and-participation-eu_en#:~:text=Related%20links,Roma%20people%20in%20the%20EU,ban%20across%20EU%20Member%20States, accessed on 24 May 2022.