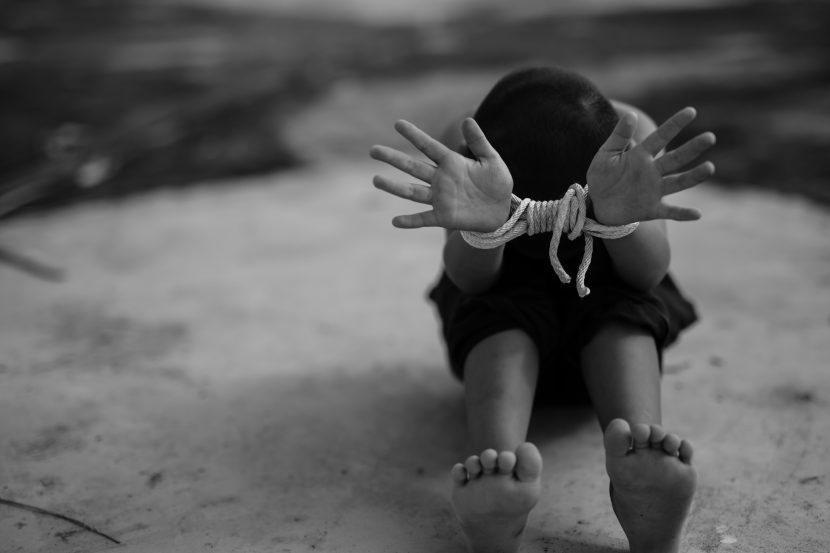 While the European Union stands as a shining beacon of child rights and protection in the world, a dark presence tarnishes it in the form of child trafficking. Every year thousands of people are forcibly transported into the EU. At any given time, it is thought that there may be up to 140 000 people trapped in human trafficking. According to UNICEF, 20% of the victims are children, most of whom are sold into the sex industry.

What is child trafficking?

According to the United Nations, trafficking of children is a form of human trafficking and is defined as the “recruitment, transportation, transfer, harbouring, and/or receipt” kidnapping of a child for the purpose of slavery, forced labour and exploitation (Protocol to prevent, supress and punish trafficking in persons, especially women and children, supplementing the United Nations Convention against transnational organised crime).

Who are the victims?

Thirty percent of all trafficking victims in Europe are children. In contrast to the trafficking of adults, most of the victims originate from outside the European continent. Many of the victims are unaccompanied minors fleeing war, poverty, and misery to find a better life. They are picked up by traffickers who lure them into their circle by making promises of a better life in the EU (Hindu Business Times, 2019).

Southern Asia, the Maghreb, and western Africa constitute major trafficking hubs. Nigeria, in particular, is where many of the victims originate from, girls constituting two thirds of all child trafficking victims. Most troubling of all is that in most recorded cases the children are sold by their parents. In a majority of these cases, the families cannot support themselves or their child and thus sell them to a human trafficker who promises high wages in Europe (Europol, 2018).

“My family’s contact then told me that to pay the debt, I would be working as a prostitute in brothels It was then that I realized that my family’s contact was a madam. I refused and called my parents to explain what was happening, but they told me to obey her and do whatever she told me to do. I didn’t have any papers and didn’t know my rights. She said that if I asked anyone for help, I would be deported, so I didn’t think I had any choice but to become a prostitute”. My mother begged me to do what they said.

— A Nigerian girl sold into prostitution in Germany by her family

In almost every case like the above, traffickers use lies, deception and false promises to lure the most vulnerable of individuals into an industry that makes an estimated 70 billion dollars a year in Europe alone off the suffering of the innocent.

What awaits them in the EU?

Once victims realise that they have been lied to, it is usually too late to turn back. The trafficking networks are effective and brutal in keeping their human cargo in line and away from safety. Psychological torture such as humiliation and imprisonment are common along with physical acts of violence like beatings for those who do not completely submit to their captors and the vile tasks they are forced to undertake. Ninety percent of registered ex-child trafficking victims were put to work in the sex industry, often serving in paedophile rings.

Women form a larger role in child sex trafficking than in other forms of trafficking as it is common for minors to be put in the charge of a so-called “Mamans” who act as disciplinary figures. Psychologically, children often form a bond with their controllers, broken, far from home, and separated from their real families, they come to see their “Maman” as a mother figure in a one-sided abusive relationship. This abhorrent example of child manipulation makes it very hard for the abused to seek out help as even though the “Maman” truly acts as a cruel authoritarian figure, the victim is gaslighted into believing that seeking an exit would be a betrayal of the person to who they have become attached (UNODC, n.d).

For the ten percent who are not sold into the sex industry, many can face being illegally sold into adoption or even having their organs harvested. However, most are put into forced labour. Children in this situation often face long, gruelling hours and dangerous work along with a highly abusive environment in which they are little more than a tool. The majority of children in this situation work in agriculture, often in contracting companies owned by the trafficking rings and their affiliates (euobserver; 2016).

In the cases of both forced labour and prostitution, victims are often indentured and told to pay travel and housing costs. These costs can be fixed at tens of thousands of euros, often increasing over time and are effectively unpayable with the “wage” provided to the minor.

Without direct outside help, the end of this ordeal is virtually impossible for children who are stuck in this form of slavery.

For the survivors of this ordeal, rehabilitation is a difficult and painful task. Years of abuse and sub-human treatment make it difficult for survivors to trust anyone. Relationships can be impossible and even basic socialisation can be difficult.

Due to their psychological damage, survivors often find themselves ostracised by people who are unaware of their condition and who label them as antisocial. Even when those around the victim know about their past, relationships may still be strained due to warped expectations and embarrassment or shame about what the victim has suffered.

Deprived of childhood and having led a life of torment, victims need a long time to adjust to the world around them and learn the norms and expectations of society. The risks of self-harm, alcoholism, drug abuse and suicide are high amongst the survivors. Rehabilitation programmes offered by social centres, care homes and governments are imperative for those who escape the system.

Since its beginning, Humanium has existed to protect children’s rights worldwide. Humanium condemns child trafficking in any form possible, it is a complete deprivation of a minors’ rights and liberties and it should be opposed using all prevailing laws and standards.

We therefore call for the unconditional and complete abolition of child trafficking on a global level in order to help end the abuse of vulnerable minors, and we wish to sensitize executive and legislative powers in every country, as well as on the European Union level, to put far greater focus on child trafficking.

What can I do?

Here are a few ways in which YOU can help fight child trafficking:

The more people know about the subject, the more they can recognise the signs of trafficking. Educate yourself and those around you on the subject. When the general public knows more about how trafficking takes place, the criminal gangs lose power.

If you believe a child is in danger, report it. When you see suspicious activity that you believe could be related to child trafficking, alert the police and/or the proper authorities immediately. A one-minute phone call could save lives.

3. Stay on top of current events

Watch the news, remember missing child reports. If you know your area is prone to crimes such as trafficking, then stay alert to possible signs of criminal activity. Know when you can help by simply being attentive to your environment.

If you or anybody you know is a victim of child trafficking, the Humanium Helpline offers professional advice by our team of legal volunteers around the globe, as well as guidance and contact of relevant institutions, if necessary.

Europol, Child trafficking: who are the victims and the criminal networks trafficking them in and into the EU, retrieved from: https://www.europol.europa.eu/newsroom/news/child-trafficking-who-are-victims-and-criminal-networks-trafficking-them-in-and-eu

Nikolaj Nielsen (euobserver), child trafficking in the EU on the rise, retrieved from: https://euobserver.com/justice/133482