Influence of religion on children and their rights

Nearly 86% of the world’s population is religious, including all religions. In numerous countries, religion guides social behavior and plays a significant role in daily life, including for children.

A religion is a group of beliefs and rituals.

It consists of rules, stories and symbols which are adopted by the society, a group or a person. Religion may be a way of life and/or a search for answers regarding life and death.

Definition of freedom of religion. How is it protected?

Children, like adults, have the freedom to choose and practice their religion, this right being protected by article 14 of the Convention on the Rights of the Child: “States Parties shall respect the right of the child to freedom of thought, conscience and religion.”

The African Charter on the Rights and Welfare of the Child of 1999 also defends religious freedom for children in article 9. The Committee on the Rights and Welfare of the Child can draft reports after having investigated a country. In Europe, in the 47 countries making up the Council of Europe, freedom of thought and religion are protected by article 9 of the European Convention on Human Rights, for children as well as adults. If a country does not abide by it, it may be punished by the European Court of Human Rights.

Map of different majority religions and beliefs in the world 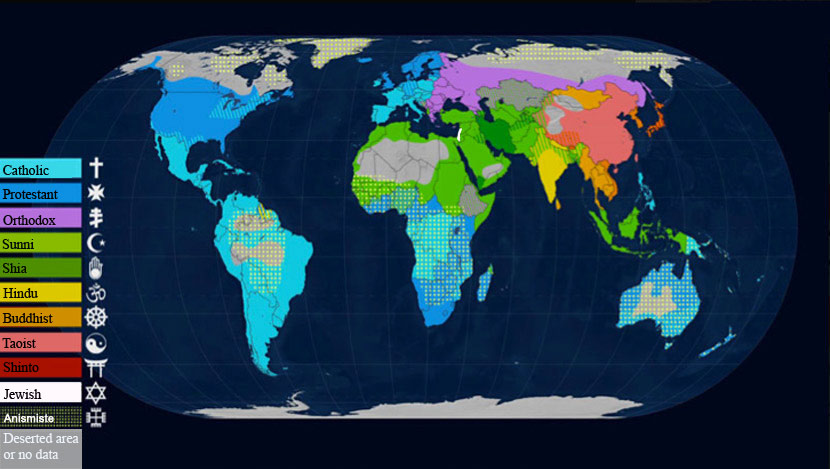 The notion of religious freedom is not universally recognized and accepted throughout the world. People do not have the same freedom of religion from one country to another.

Theocracies (Vatican City, Saudi Arabia, the Republic of Maldives and the Islamic Republic of Iran) are countries where the clergy exercises power in the name of God and where the practice of other religions is formally prohibited and/or strictly controlled.

Under communist regimes, practice of religion was prohibited. Today, the People’s Republic of China and Cuba are officially secular states which practice state atheism. Religious practice is permitted but tightly controlled and regulated.

There are also countries with a state religion. In these countries there is a strong relationship between religion and government. As a general rule, religion is written into the constitution and enjoys an elevated status. These countries include, for example, Jordan, Greece and Cambodia.

Finally, there are numerous secular (neutral regarding religion) and laical (independent of religious authority) nations. This includes the vast majority of countries in the world, for example Mexico, Turkey, France, Ethiopia and Brazil. All recognize freedom of religion and establish a separation of Church and State.

Throughout the world, certain religious minorities are restricted and cannot practice their faith. This affects children belonging to these minorities as well, who do not have access to the same schools and, once adults, will not have access to every profession. Poorly regarded by the state and society, they remain at the margins of the community. In some countries, apostasy (changing one’s religion) is a crime punishable by death.

In numerous countries and on every continent, religion can be a source of conflict, and even wars. Unfortunately, children are too commonly the victims. And, unfortunately, examples abound throughout the world.

In the Balkans region of Europe, even though the war is officially over, areas of tension persist between Orthodox Christians, Catholics and Muslims, the latter continuing to be the victims of discrimination. In Ireland, The Troubles between Protestants and Catholics officially ended on 10 April, 1998 with the Good Friday Agreement after 30 years of civil war which resulted in 3,500 deaths, of which many were women and children.

In the Caucasus, at the gates of Europe and Asia, every day people are killed in terrible clashes between Orthodox Christians and Muslims in Chechnya, Dagestan and Nagorno-Karabakh.

In Africa, in Nigeria religious tensions between the predominantly Muslim north and the Christian and animistic south have resulted in a large number of deaths since Christmas 2011. In Egypt, Copts are victims of discrimination and children are the first victims. Access to school, health care and employment are restricted for the Coptic minority.

In some countries, religious extremists strongly discriminate against women and young girls. Under the Taliban regime, in Afghanistan, girls were not allowed to go to school. This ban has since been lifted, but an entire generation of girls was never even taught to read or write. In addition, the regime banned playing in the street, laughing, singing and listening to music. Even if the Taliban is no longer in power, certain customs and traditions remain. Elsewhere still, girls continue to be subjected to discriminatory laws.

All religious fundamentalism, be it Christian, Muslim, Jewish or others, endangers the children’s rights, especially those of girls. Certain religious interpretations linked to ancestral traditions can be the source of violence committed against children. Let us look specifically at the cases of female genital mutilation and child marriage.

This is the union of two children or, more often, of a young girl and an adult man, sometimes much older. These marriages can be found throughout the world, but mainly in (Sub-Saharan) Africa and Southern Asia where values such as virginity and fertility of women are very important. Child marriage is not approved by any religion, even if some still use this justification.

In Islamic West Africa, the practice of “sadaka” (offering, donation in Arabic) has become a religious practice. The parents, in order to avoid Hell, give their young girl to a marabout, a religious dignitary, or a member of their family. As this is done without the consent of the young girl, this practice goes against the Quran. 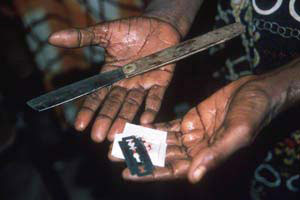 Female circumcision is the mutilation of the genitals of girls, during childhood, most commonly done in unsanitary conditions. Mainly situated in Africa, the majority of populations that practice female circumcision are Muslim, but the practice is also found in Christian, as well as Jewish communities. However, no religion mentions or supports this custom.

It stems rather from ancestral tradition and popular beliefs as circumcision was already practiced before the arrival of Christianity and Islam. Recently, religious leaders have publicly opposed these mutilations. For example in Senegal and Egypt, Imams are speaking out to these populations, calling for a ban to put a stop to this dangerous and violent practice.

The consequences of female circumcision are dramatic. Young girls can die from hemorrhages and infections, be infected by HIV/AIDS, and suffer intense physical and psychological pain.

The provision of religion for children

Religion is very important for many societies; it allows children to learn morals, and answers questions regarding life and death, relationships between people and their place in the world, and notions of good and evil. The major religions are all based on ideals of wisdom, solidarity and justice. All this is transmitted to children by their family, school and society so that they may become wise and respectful.

Support of the Rights of the Child by religious authorities

Religious authorities can play an important role in improving the application of the Rights of the Child. As influential and respected members of their communities, religious leaders can encourage the actions and developments of the protection of children. They also possess the necessary influence to stop these practices, customs, sources of violence and discrimination against children.

Religious leaders can become leading actors in the defense of children’s rights. For example, this has been the case in Afghanistan, where the promotion of education for young girls has gone through certain religious dignitaries. In Ethiopia, a week of awareness for HIV/AIDS was created by Christian and Muslim religious leaders.

Throughout the world, many religious groups promote and actively defend the Rights of the Child, such as Islamic Relief Worldwide and Secours Catholique. This is explained by the fact that the defense and protection of children is a cornerstone in the philosophies of most religions.