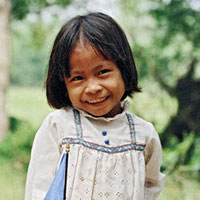 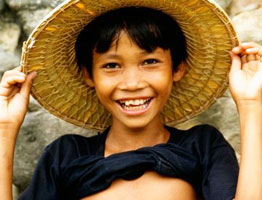 Although the Cambodian economy is today is one of the fastest growing in Asia, the country is still a long way from adequately protecting the rights of children. Actually, the situation for children in Cambodia is grave, and often tragic, and this country must make serious efforts so that children can benefit from better living conditions.

Around 30% of the population lives below the poverty line in Cambodia, a country that is just recovering from a violent war that tore it apart at the end of the 20th century. The State is equally marked by a strong disparity between urban and rural areas. This poverty touches children most of all, who as a result suffer from malnutrition and marginal life conditions. 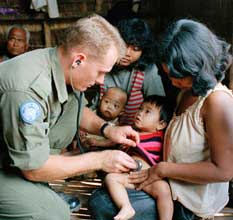 In Cambodia the situation is serious and the health of children is poor.

AIDS is rampant and unfortunately affects many children. A third of new infections are transmitted from the mother to the child, and what’s more, a great number of children find themselves orphans after their parents die of AIDS.

Hospitals are insufficient and above all are in very bad condition. Often, they don’t have pediatric services so children are exposed to all the infections and illnesses present in the hospital.

Children’s health is equally affected by the consequences of Cambodia’s recent conflict. For example, half of anti-personnel mine victims are children.

More than three quarters of births take place in the mother’s house in Cambodia. This explains in part the country’s the high infant mortality rate.

Access to potable water is a very serious problem in Cambodia that affects rural zones in particular. In fact, in these regions only around 16% of the population has access to potable water, and it should be known that around 80% of Cambodians live in the country. Because of this, numerous children die from diarrhoeal illness and hygiene remains equally problematic: households and even schools are not always equipped with toilets.

Currently, more than 10% of Cambodian children do not go to school. Access to education for young girls is even more restricted since only 20% of them go to a secondary school.

Even if the education rate has improved in the past few years, the conditions of education are deplorable. The material and hygiene in schools is largely inadequate. Also, children combine work and school and so can’t study in good conditions.

Labor is an everyday reality for around 45% of children age 5 to 14 in Cambodia. It is estimated that more than 300,000 children are required to work to support the needs of their families.

Extremely dangerous tasks await children from the poorest families. These children are often confronted with the sex and drug trades. Others must provide unsafe and dangerous labor in salterns, factories, or for the booming construction industries. 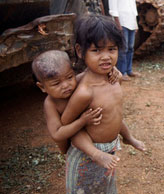 Many Cambodian children looking for work are exploited. They are often victims of exploitations and sexual assaults.

A major part of this traffic takes place on the border with Thailand. There, young Cambodians fleeing the poverty of their country, find themselves at the heart of the sex trade and face abuse, assault, unwanted pregnancies, and miserable living conditions.

Cambodian legislation suppresses this child trafficking and sexual exploitation, but unfortunately, law enforcement is unreliable and law enforcers are frequently the perpetrators of harassment, abuse, and violence towards those that they arrest. Because of this, the rare rapes and assaults that are reported are lost in a completely corrupt judicial system.

23% of young Cambodian wives confess to have been married before the age of 18.

It happens that when a Cambodian girl is raped and the aggressor is known, the family of the victim, ashamed by the impurity of their daughter, proposes marriage to the rapist. The young girl must then not only overcome the appalling aftermath of a rape, along with marriage at too young an age, but she must also accept her rapist sharing her life every day. Such a situation is appalling to say the least, and the psychological consequences it creates are seriously irreparable.

More than 30% of births are not officially reported in Cambodia.

Registering a child’s birth and granting them a nationality gives them legal capacity; this means that for children whose identity is not registered, they are not officially recognized as a member of society and therefore cannot assert their rights; they are invisible in the eyes of society.