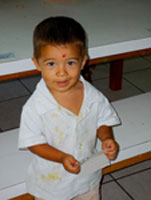 Over the years, Costa Rica has become a country where the situation of children is one of the best. International conventions and child development are respected: numerous programs allow children to develop and grow in good conditions. Despite everything, some problems remain and must be eradicated: access to care, disparate education, child labour…

One Costa Rican child in four lives below the poverty line. This estimate shows that despite a relatively low poverty rate in Costa Rica (16% of the population is affected by this problem) children are the primary victims.

Child poverty is characterised notably by the failure to respect the Convention on the Rights of the Child (CRC), which Costa Rica has signed. Because of this, some children don’t have sufficient access to drinkable water, a healthy diet, an education, etc.

Following recent improvements to medical care, Costa Rica now has the longest life expectancy in Latin America. The Code for Children and Adolescents stipulates that “all minors will benefit from medical care directly and freely from the State”.

Despite a very effective health system, problems such as infant mortality and death linked to contamination by the AIDS virus persist.

In fact, 10‰ of children die before reaching the age of 5. Very often the first victims are children from poor families and inhabitants of rural regions.

Despite real improvements in this area, 0.2% of the population is affected by HIV in Costa Rica. Information for future mothers about the transmission of the virus is being developed in order to significantly lower the number of infected persons.

In Costa Rica, primary school is free and mandatory. The educational system offered to children is of fairly high quality, and many have access to it. Nevertheless, 8% of children are not educated. A large majority of these come from poor families or indigenous peoples.

Furthermore, during coffee bean harvest, teachers in the poorest regions go to work with the children to be able to buy educational materials. This economic use of children is contrary to the CRC.

Costa Rica, a major producer of coffee, uses numerous children to gather coffee husks. 5% of children aged 5 to 14 are estimated to perform an economic activity

This situation is serious, even more so because school vacation coincides with the harvest of coffee beans. Unfortunately, the children don’t have a choice and must get up every day at 5 in the morning to go to the plantation if they want to be able to buy games, clothes, or school supplies.

This economic activity is detrimental to the health of these children who are more susceptible to respiratory illnesses, other illnesses, and to getting hurt.

Violence towards children in Costa Rica is one of the most serious social problems of the region. The violence suffered by children can come as much from the family as from school.

This physical, psychological, or even sexual violence has serious consequences on the health of the young.

The amount of sexual violence is catastrophic: more than 700 cases were reported in 2009, and it is most likely that many more went unreported.

Costa Rica is faced with a large number of child trafficking victims. Children, mainly those living in the streets, are susceptible to being commercially exploited.

For example, many of them are victims of sexual tourism; they are used by traffickers as mere sexual objects. These children, poor and vulnerable, aren’t aware of the consequences of this situation on their physical and psychological health.

Although commercial exploitation of children is forbidden by law, the Costa Rican government must improve its programs to help and protect these children. 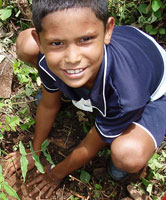 The children don’t have access to all the universally recognised rights such as the right to education, to health, etc.

What’s more, having a different culture, indigenous peoples are victims of discrimination by Costa Ricans. Young and old must fight to protect their lands and, in so doing, to preserve their culture.