Torn apart by natural disasters and a long civil war, Nicaragua is today in full economic expansion.  The situation of children has improved; however, the progress Nicaragua has made in this regard is far from satisfactory on a number of fronts, and has failed to meet the standards set by the International Convention of Children’s Rights.

In Nicaragua, nearly one out of every two persons lives below the poverty line.  Children are the first to suffer from this deplorable economic situation, all the more so since financial aid for families is rare and the amount of money miniscule.

Grand disparities are perceptible throughout the country. These disparities prevent all children from having the same opportunity to access fundamental services like education, healthcare or housing.

The national statistics concerning children’s health are encouraging and reveal real material progress. However, certain negative indicators, like the infant mortality rate, remain very high, notably as they pertain to lack of structure and inadequate personnel.

The number of adolescent mothers who die while giving birth has not ceased to increase.  These young girls sometimes find they are pregnant and are prevented by the law from getting an abortion. This prohibition can have awful repercussions, especially when abortion is denied to those girls whose pregnancies threaten their very lives, or when they are forced to give birth to children who are the result of rape or incest. It can also have a negative effect on their mental health.

HIV has a remained a cause for concern in recent years. The negative effects of AIDS on children’s lives are incontestable. One sees this not simply in terms of their health, but also with regard to such issues as discrimination and orphaned children. Better information and heightened public awareness about AIDS would permit one to considerably reduce its impact. 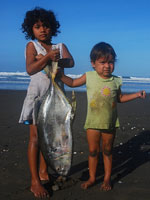 In Nicaragua, 15% of children are forced to work to help alleviate financial difficulties that their families face. This number is all the more alarming since the large majority of these children are utilized for the “worst forms of work.” Many young girls, for example, are victims of child-trafficking and sexual exploitation.

For others, work consists of agricultural tasks, domestic duties, fishing. . .

In Nicaragua, children are subjected to various forms of violence.  Many are the victims of physical abuse at the hands of their families. National laws are very vague:  corporal punishment is forbidden except with regard to “disciplinary corrections.” Numerous young girls are sexually abused in their own homes.  If they become pregnant, they are forced to keep the baby.

Furthermore, despite being forbidden by law, torture continues to be a problem and is in fact practiced by the police with almost complete impunity.

More than 40% of young girls are married while they are still minors. The minimum age for getting married is 14 for girls and 15 for boys, with parental consent. Girls who marry this early in life have only limited social interaction because they have ceased to attend school.  Moreover, they run the risk of premature pregnancy—which can prove hazardous to both their own health and the health of the child.

Academic structures and programs are out of date and thus stand in dire need of repair and reform. Lack of suitable personnel remains a problem, notably with regard to the number of cases involving violence within educational establishments. 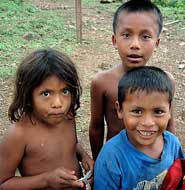 Thousands of children in Nicaragua are of indigenous or even African descent. Such children are the victims of discrimination on part of the rest of the population, as well as of public service personnel. This and other obstacles impede their ability to exercise their most fundamental rights.

Another difficulty they encounter pertains to their right to an identity. Their parents do not always report such births to the proper authorities—which can lead to further problems.  Plus, their right to practice their own customs and have their own culture is not sufficiently respected by Nicaraguan society as a whole.