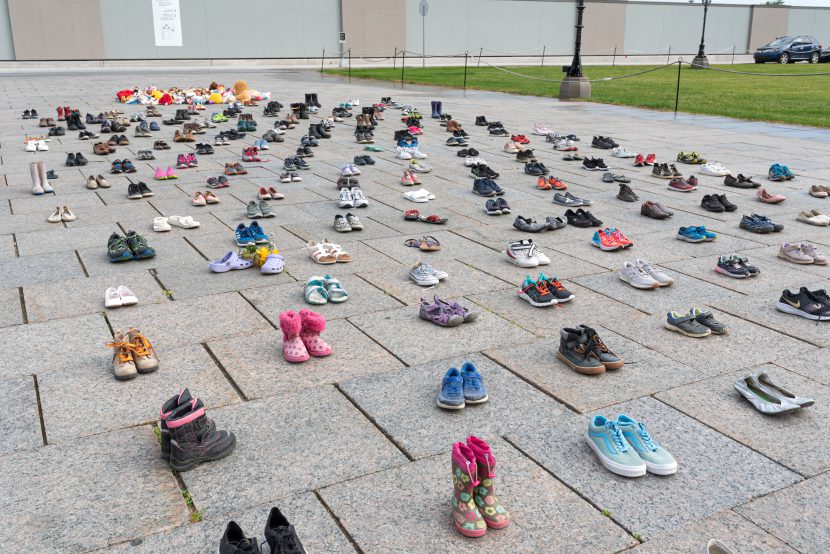 The recent discovery of unmarked graves containing the remains of Indigenous children has shaken Canada over the past few months, highlighting the veil that has been thrown over both the atrocities of the past and the current vulnerable situation – stemming primarily from the colonial context – in which Indigenous children and adults find themselves.

Discoveries at the sites of former Canadian residential schools

In May 2021, the discovery of the remains of 215 Indigenous children buried on the site of a former residential school for Indigenous children in Kamloops, British Columbia, not far from Vancouver, shook Canada (Matte-Bergeron & Bois, 2021). 215 pairs of children’s shoes were placed on the steps of the Canadian Parliament in Ottawa and in front of a church in memory of the young victims. For 215 hours, flags were flown at half-mast on federal and provincial buildings (Cabot, 2021).

A few weeks later, in Saskatchewan, 751 unmarked graves were discovered, the vast majority of which contained the remains of children (Austen & Bilefsky, 2021). This put the unequal and discriminatory situation faced by Indigenous people high up on the political agenda.

To understand the significance of the discovery of Indigenous children’s remains in residential schools, a brief overview is necessary. The first official process designed to impose the colonial vision came with the implementation of the Indian Act of 1876. This Act made the colonial system a reality by organising the assimilation of Indigenous people in a more concrete way and by establishing legal frameworks for the measures put in place in the past by colonists. This law introduced a policy of assimilation, with the aim of civilising Indigenous communities (Parrott, 2006).

As cultural changes generally take place by educating young people (Milloy, 1999), residential schools for Indigenous children were one of the cornerstones of Indigenous people’s assimilation, and were a direct consequence of the enactment of the Indian Act. As a result, children aged between 6 and 15 were taken from their families and placed in residential schools that were far away from their reserves, where they learned white European culture, in particular the vision of Western society, its social norms, and its languages. In the 1930s, there were 80 Canadian residential schools.

They remained open for more than 160 years and were attended by 150,000 children (L’ histoire des pensionnats indiens du Canada, s.d.). At their peak in the 1930s, it is thought that approximately 75% of First Nations children attended these residential schools. The majority were also victims of widespread neglect and abuse (Conseil en éducation des Premières Nations, s.d.).

During the work of the Truth and Reconciliation Commission, survivors gave evidence of the events that occurred within residential schools. Their statements are available on the Commission’s website (Commission de vérité et réconciliation du Canada, 2015). The discovery of the graves only confirms the testimonies received by the Commission.

“Many students who went to residential school never returned. They were lost to their families. They died at rates that were far higher than those experienced by the general school-aged population. Their parents were often uninformed of their sickness and death. They were buried away from their families in long-neglected graves. No-one bothered to count how many died or to record where they were buried.”

Every Child Matters and the National Day for Truth and Reconciliation

The discovery of children’s remains at a number of residential schools seems to have awakened Canadian public opinion and the political class.

“We’re not going to hide from [it]. We have to acknowledge the truth. Residential schools were a reality – a tragedy that existed here, in our country, and we have to own up to it. […] I know that the last few days have been something of an awakening for many non-Indigenous Canadians who knew of the existence of residential schools, but did not understand just how horrific it was, the reality experienced by Indigenous children, their families and their communities.”

In response to this news, the federal government established a new federal public holiday on 30th September, the National Day for Truth and Reconciliation. Its aim is “to recognise and remember the legacy of residential schools”, according to the Canadian government website (Jour férié fédéral : Journée nationale de la vérité et de la réconciliation, 2021). Establishing a new national public holiday means the Truth and Reconciliation Commission of Canada’s Call to Action 80 has been made a reality (Blake, Cassels & Graydon S.E.N.C.R.L./s.r.l., 2021).

Before the day was a public holiday, it was commemorated as Orange Shirt Day: Every Child Matters. The symbol of the orange shirt is taken from the story of Phyllis, who survived her experience at a residential school. At the age of 6, Phyllis was taken to the St. Joseph Mission residential school in Williams Lake in British Columbia. As soon as she arrived, the orange shirt her grandmother had just bought her was taken from her and never returned.

“I lived with my grandmother on the Dog Creek reserve. We never had very much money, and there was no social security, but somehow my granny managed to buy me a new outfit to go to the Mission school. I remember going to Robinson’s store and picking out a shiny orange shirt. It had pretty string laced up in front, and was so bright and exciting – just like I felt to be going to school! When I got to the Mission, they stripped me, and took away my clothes, including the orange shirt! I never saw it again. I didn’t understand why they wouldn’t give it back to me. It was mine! The colour orange has always reminded me of that and how my feelings didn’t matter, how no-one cared and how I felt like I was worth nothing. All of us little children were crying and no one cared.”

Since 2013, when the event was first held, every 30th September has seen the commemoration of the atrocities of the past but has also been an opportunity to question the dominance of Canadian society over Indigenous people, and the harmful effects that this has on Indigenous children.

Establishing this public holiday to commemorate the children who died and to honour the survivors of residential schools has, for this year at least, awakened the conscience of the Canadian people and educated them about what Indigenous children experienced in the past and what they experience today, most notably significant discrimination (Mourgere, 2016).

Murray Sinclair, a former senator and the former chairman of the Truth and Reconciliation Commission of Canada, believes that this type of initiative is crucial to ensure people have access to information and can educate themselves about the topic (Journée du 30 septembre : un premier pas vers la réconciliation, dit Murray Sinclair, 2021).

“It’s not just about marching and dressing up and getting some time off from school or work. If you fully understand what that ceremony is about, you won’t be able to stop yourself crying.”

However, resources must be allocated each and every year to ensure that this day is properly commemorated and to enable the political class and the citizens of Canada to think about the repercussions of residential schools but also about the vulnerable situation in which Indigenous children find themselves in Canada today. (Josselin, 2021). This also means that it would be extremely beneficial for Canada’s children to actively participate in this day so that this piece of Canadian history is no longer forgotten.

The situation of inequality experienced by these children in Canada resonates with other Indigenous communities around the world. Through its advocacy, Humanium promotes the protection of children’s rights, particularly the rights of Indigenous children, as well as their active involvement in defending their rights and their culture. Join the global Humanium community and become a stakeholder in the fight to ensure that children’s rights are respected.

Shaheen-Hussain, S. (2018, may 17). Separating sick Inuit kids and parents is medical colonialism all over again. Récupéré sur The Guardian